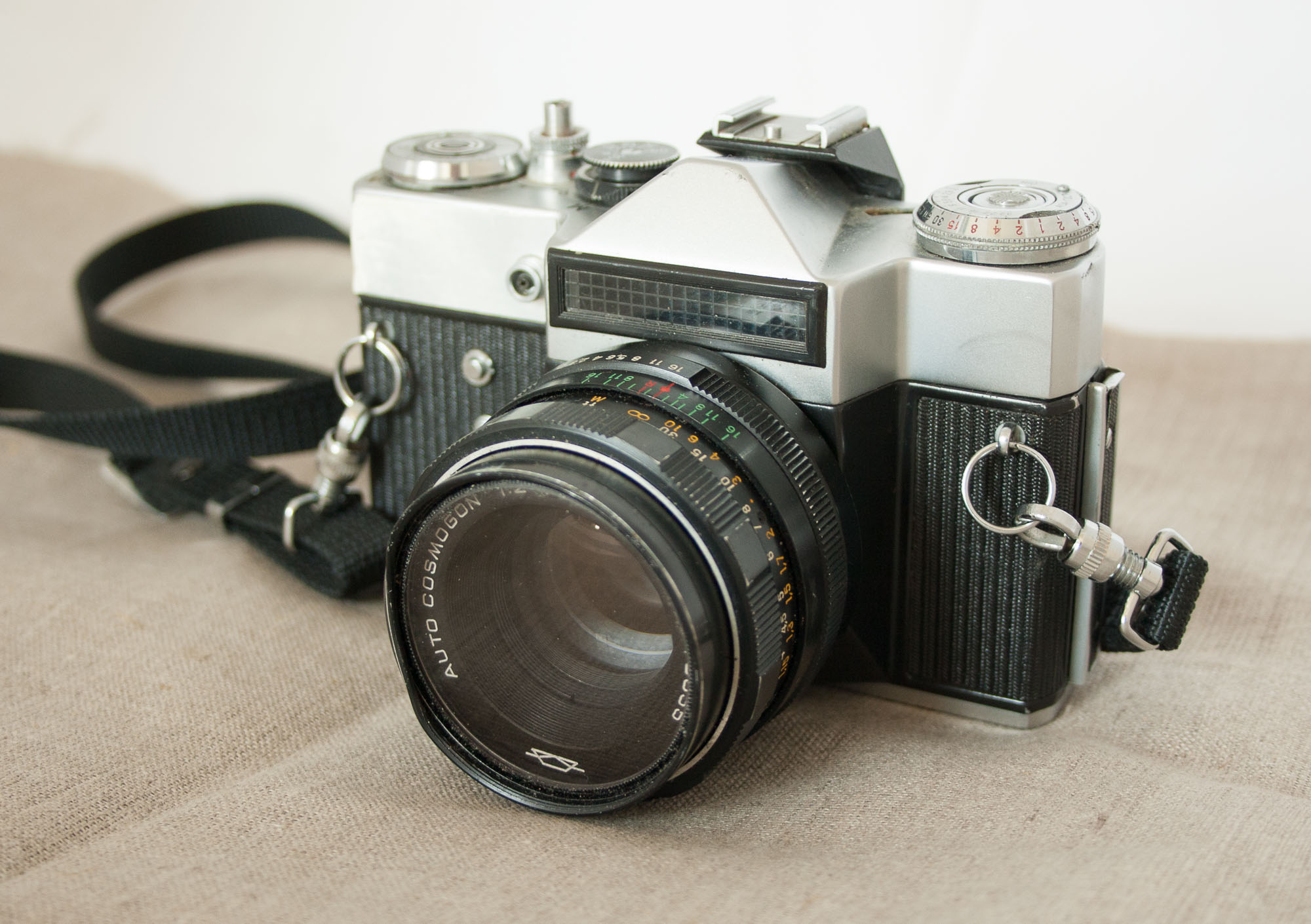 I’ve recently acquired a lot with 4 35mm vintage film cameras. Two of them were advertised as “likely functional”, with two more as “likely not functional”. This description was provided by seller based on the fact that shutter was clicking on some cameras, but not clicking on others.

Last week the box arrived, and I started the archeological process. This usually includes:

With SLR cameras this process also includes unscrewing the lens and checking the mirror. This batch got me 3 SLR cameras, and 1 rangefinder. 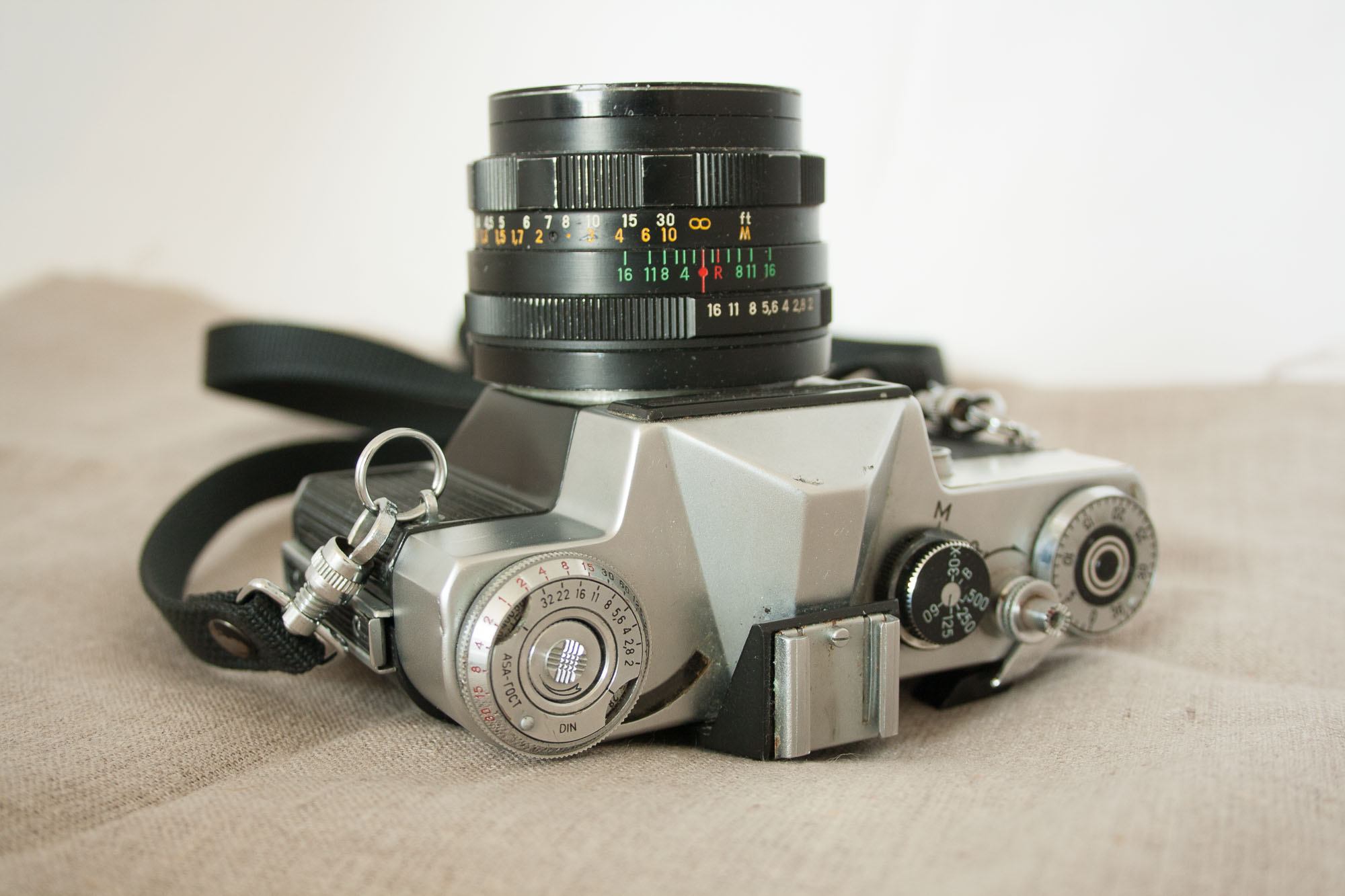 Soviet made SLR, mass produced between 1972-1984. With 58mm Auto Cosmogon lens. Seems to be in full working order - shutter, focus, exposure, aperture - all switching fine. There is a light metering cell, which works fine too - I’ve compared its reading with my portable light meter and they appear to match.

Zenit:s are notoriously inelegant, heavy cameras. A proper USSR design. They are also very rugged, can survive hard conditions and generally long living cameras. There’s very little in its mechanics what can break with time, or because you dropped it on the concrete. This specimen indeed appears to have lens filter bent, with glass and rest of the lens completely intact. One can only imagine what happened to this camera. 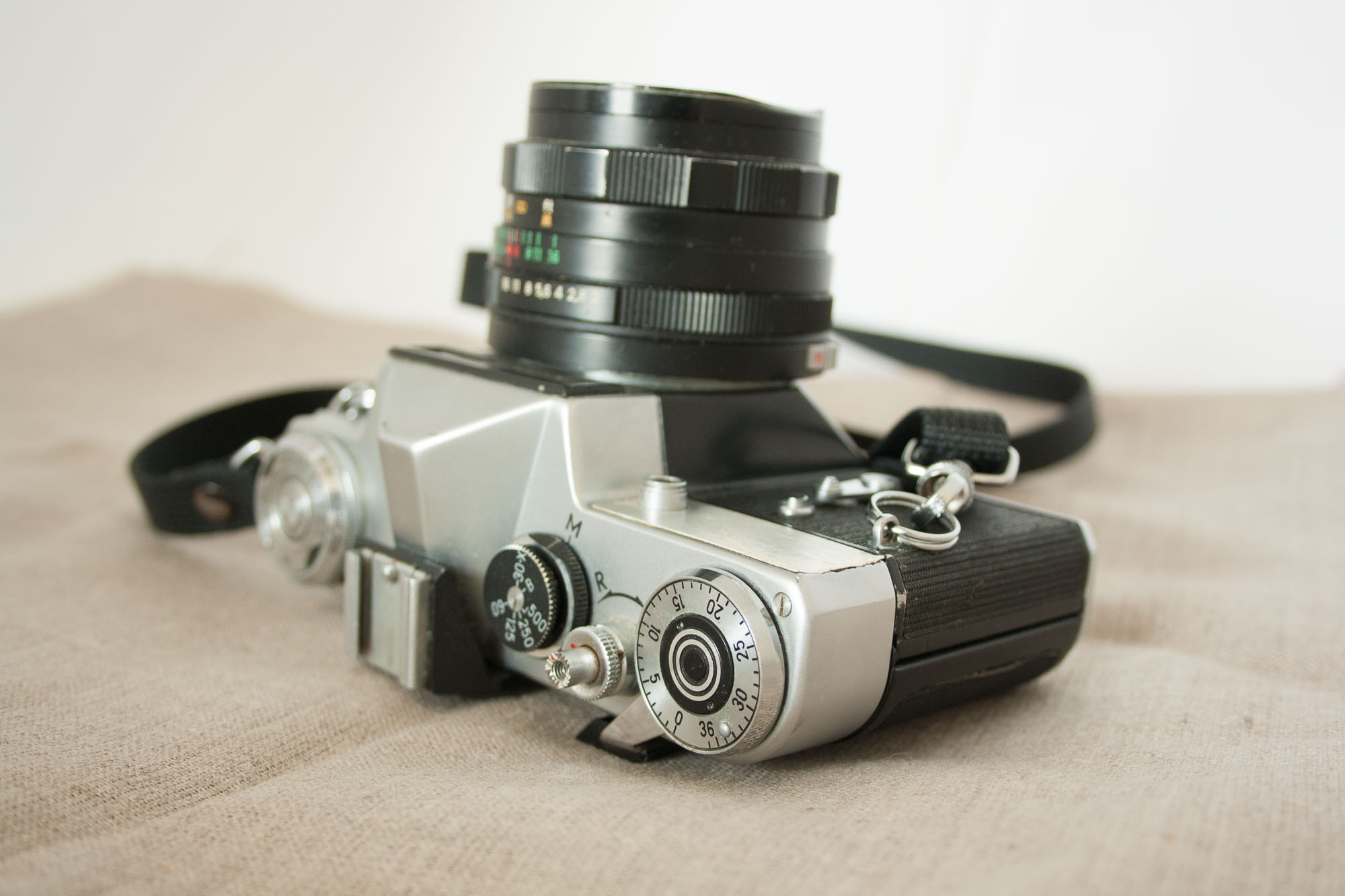 Another Zenit I own is ET model, slightly newer and even less elegant. EM seems to have a few professional features like film sensitivity gradation in both ASA and DIN units - still relevant today. Other than that it’s basically same good old Zenit camera - strong, reliable, functional and you can easily use it as a cold weapon in case of danger. Most of the camera and lens is thick solid metal. 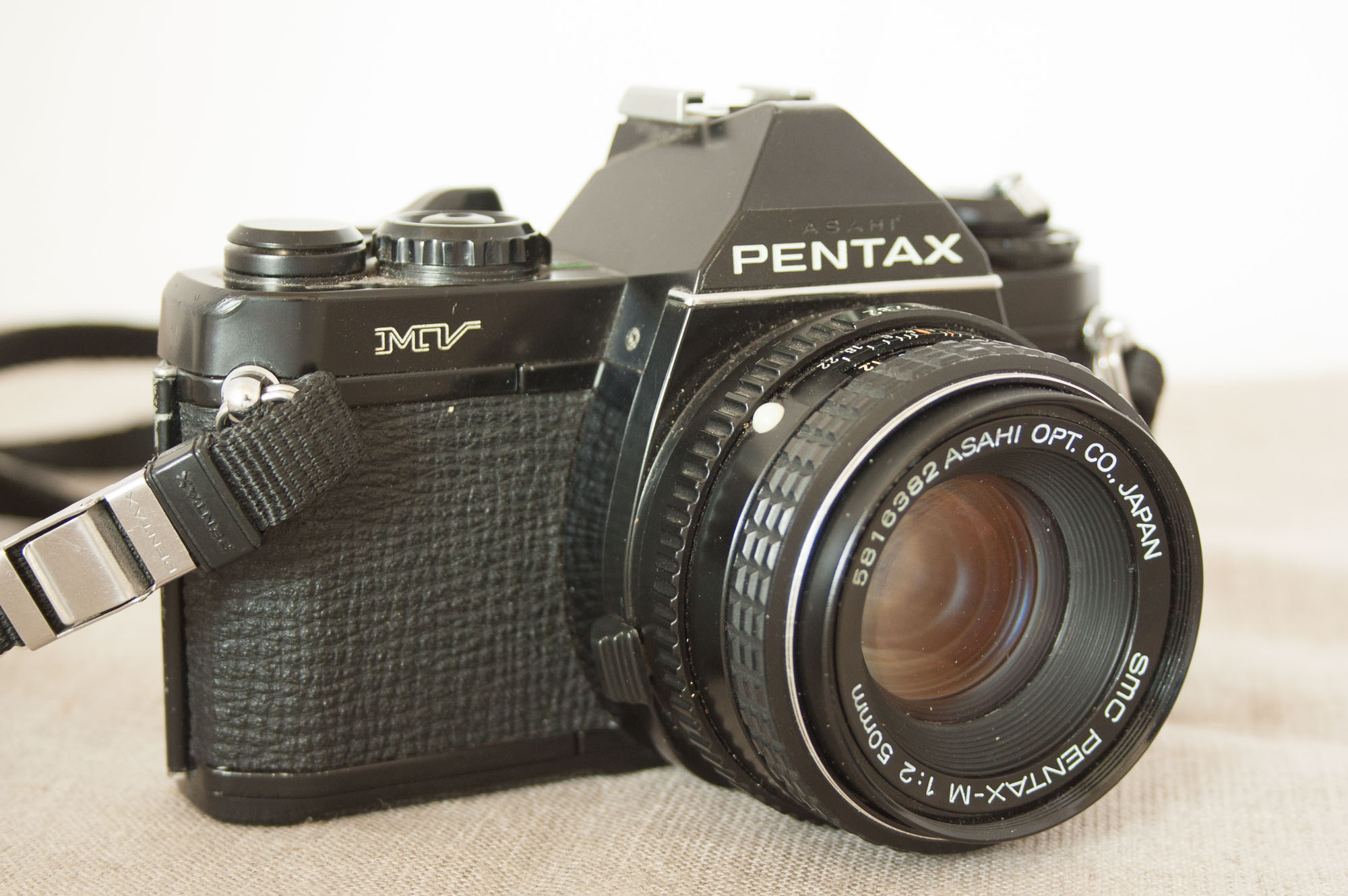 Second SLR camera in this batch. Very light, user friendly, and mostly automatic. Was originally made in 1979. Requires batteries for automatic functionality. Pretty sure it will work without batteries too by effectively reverting all features to manual control. 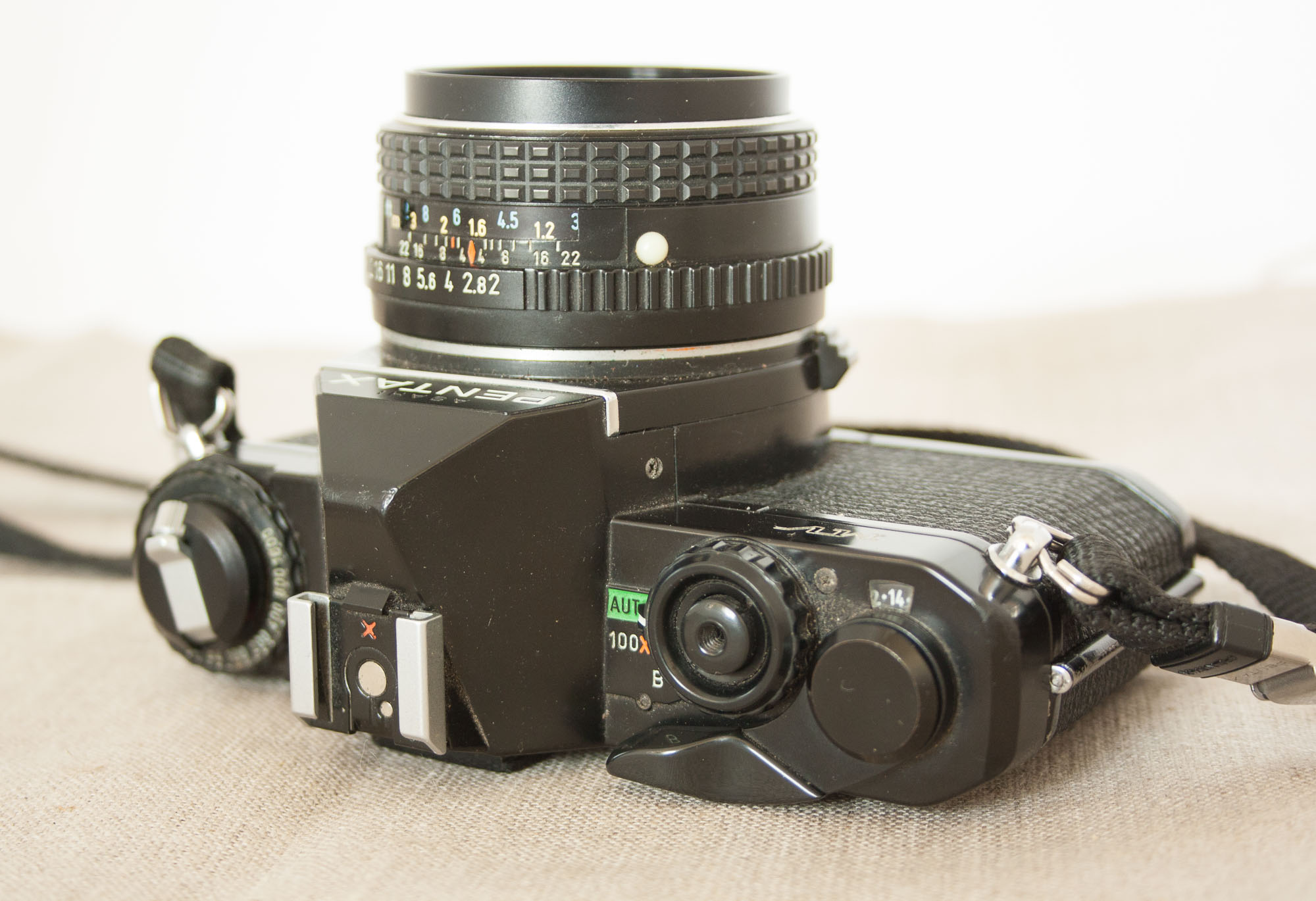 There is an issue with 50mm SMC Pentax-M lens, which is locked at 1.6m focus distance. It is possible to change aperture, but focus ring is completely stuck. I’m still optimistic since the rest of the camera are fully functional, including light metering and automatic shutter speed. It will even provide feedback via colour LED in the viewfinder, which would blink red if there’s not enough exposure, green if all is good, and yellow to warn you that it’ll attempt to shoot with slow shutter speed.

Body contains a standard Pentax-K bayonet, which is compatible with pretty much any Pentax lens. The plan is to get a replacement lens, or to do an art project by shooting things at 1.6m distance. That actually might be a good idea - to prove that the rest of the camera are fine.

It’s probably the lightest SLR camera I ever encountered. 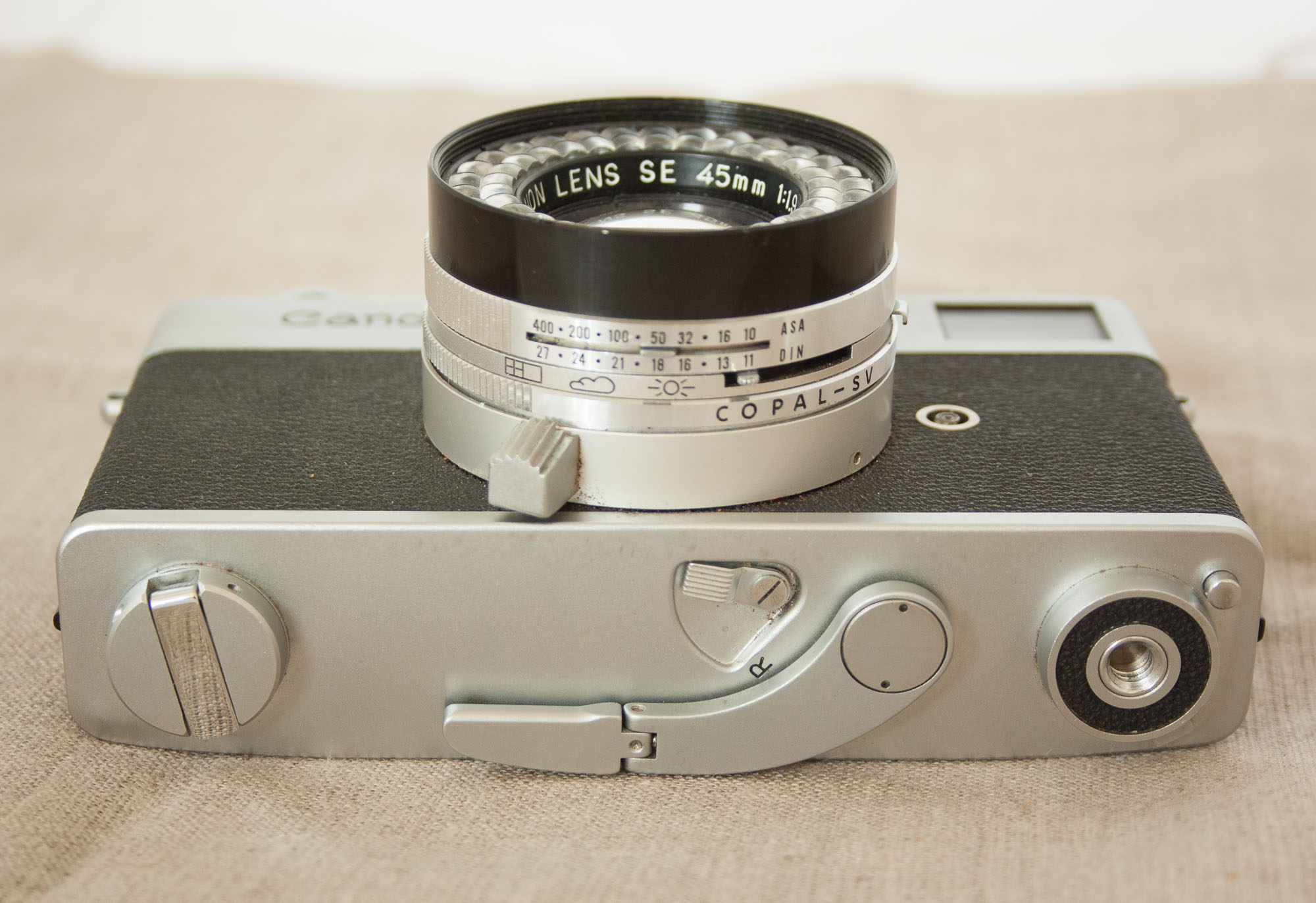 This camera was main reason I wanted this batch. Original model of the legendary Canon Canonet, created for photography enthusiasts. Famous for its light metering cell around the lens, which is often confused with a light ring. It doesn’t shine, but it does meter the light quite accurately. It suppose to use this information for setting automatic aperture and shutter speed. Automatic aperture indeed appears to work fine depending on the amount of received light. 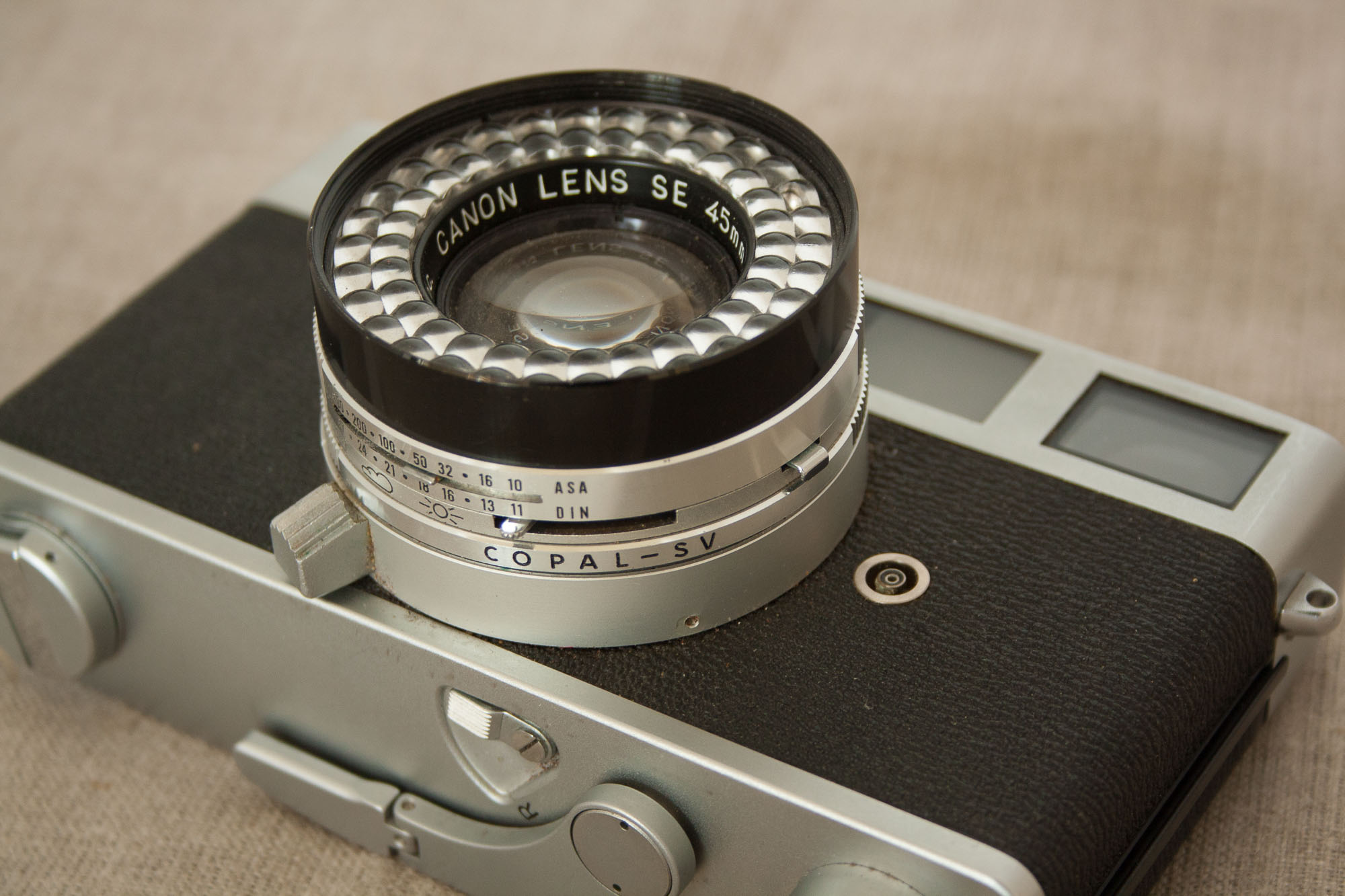 Shutter is however dead stuck. There are a number of instructions on the Internet how to fix this, and it seems to be doable. If shutter is not used for long time, its petals are getting stuck to each other and can be eventually unstuck after you disassembly the lens. Yes, the lens is not interchangeable. Camera is a whole package which is not easy to tinker with. 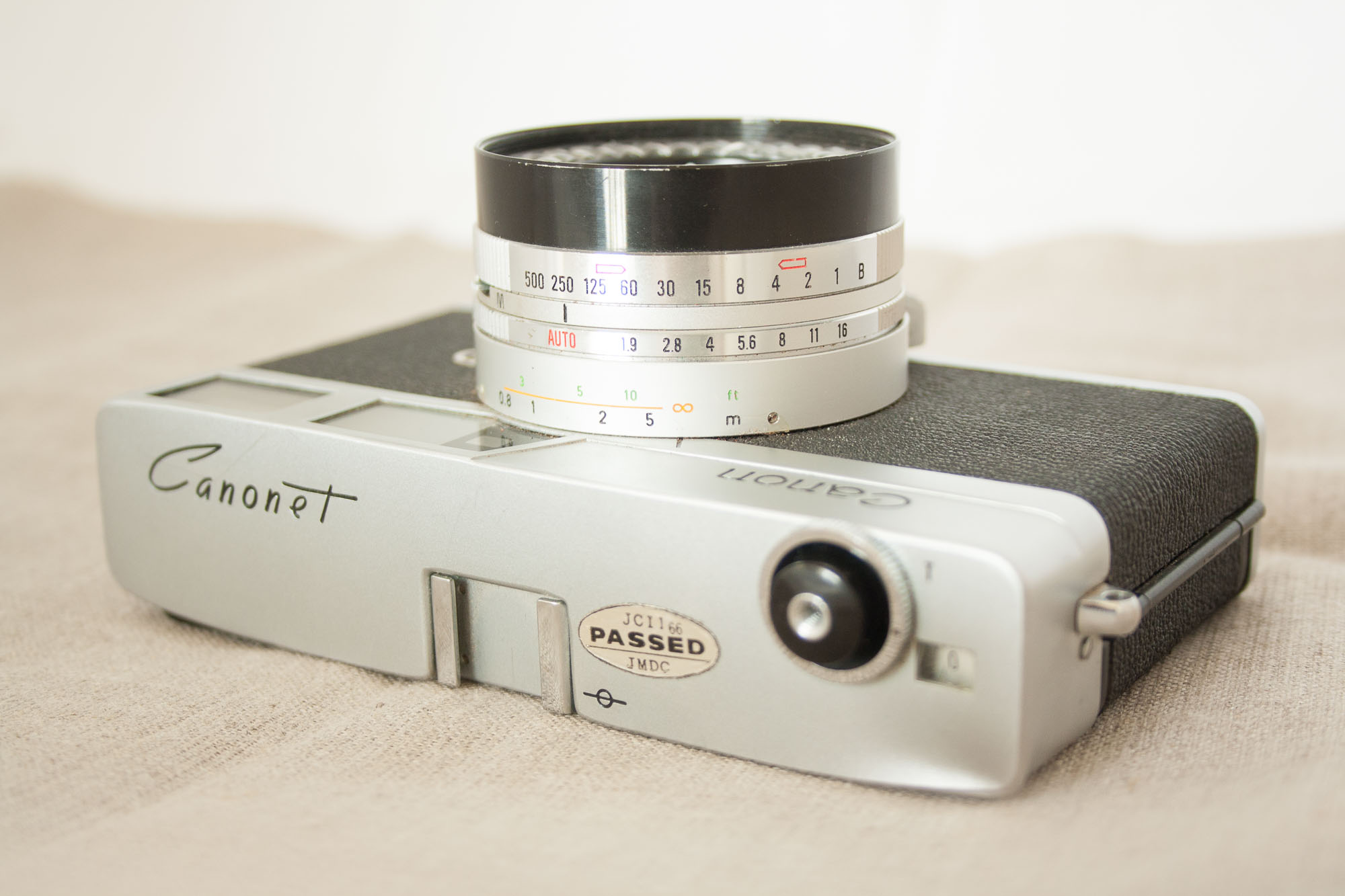 Body design is uniquely beautiful. It contains one of the most elegant film rewinder levers I’ve seen, located on the bottom of the body. It also doesn’t require any batteries. Fully automatic camera with no batteries. 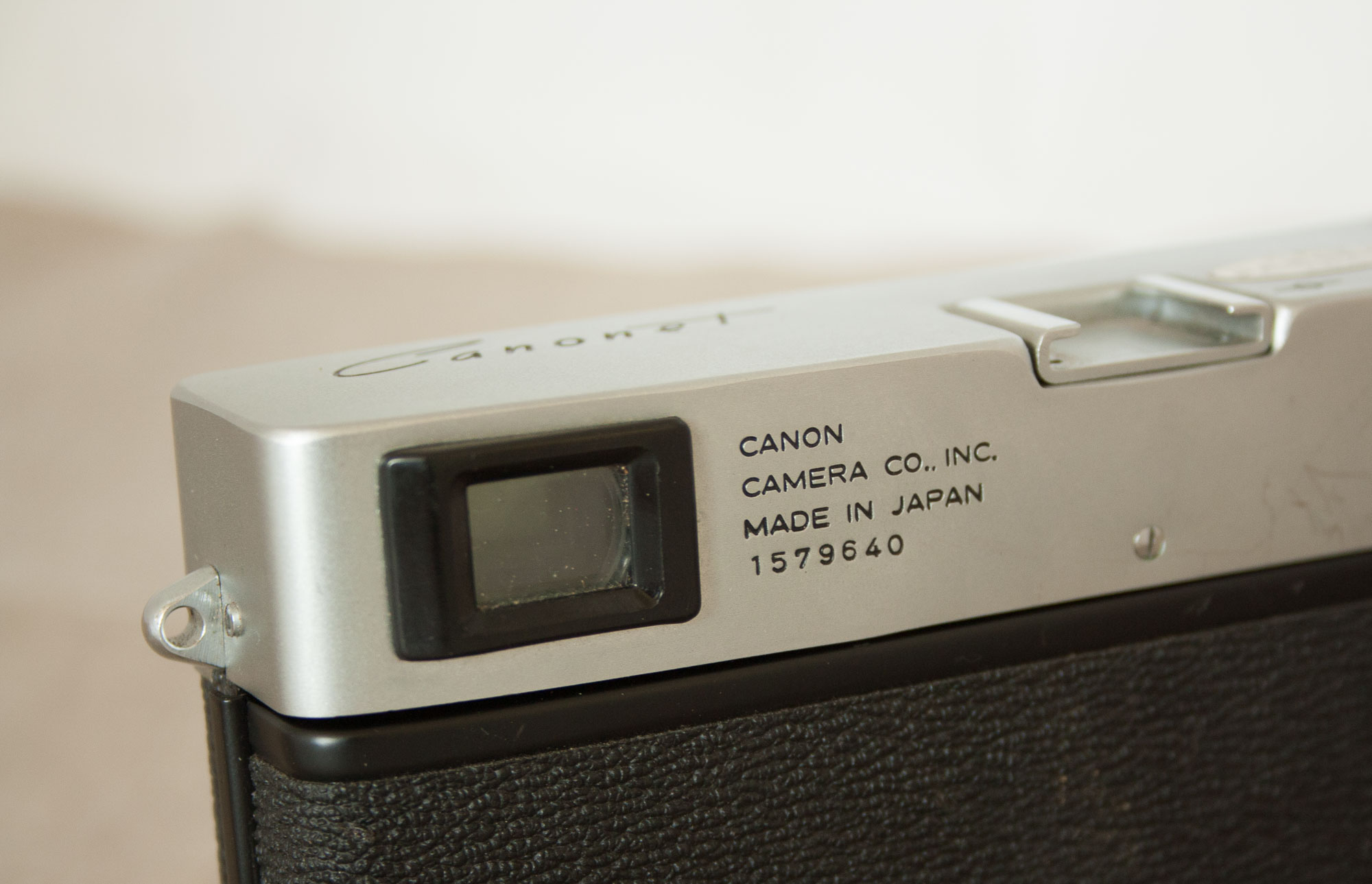 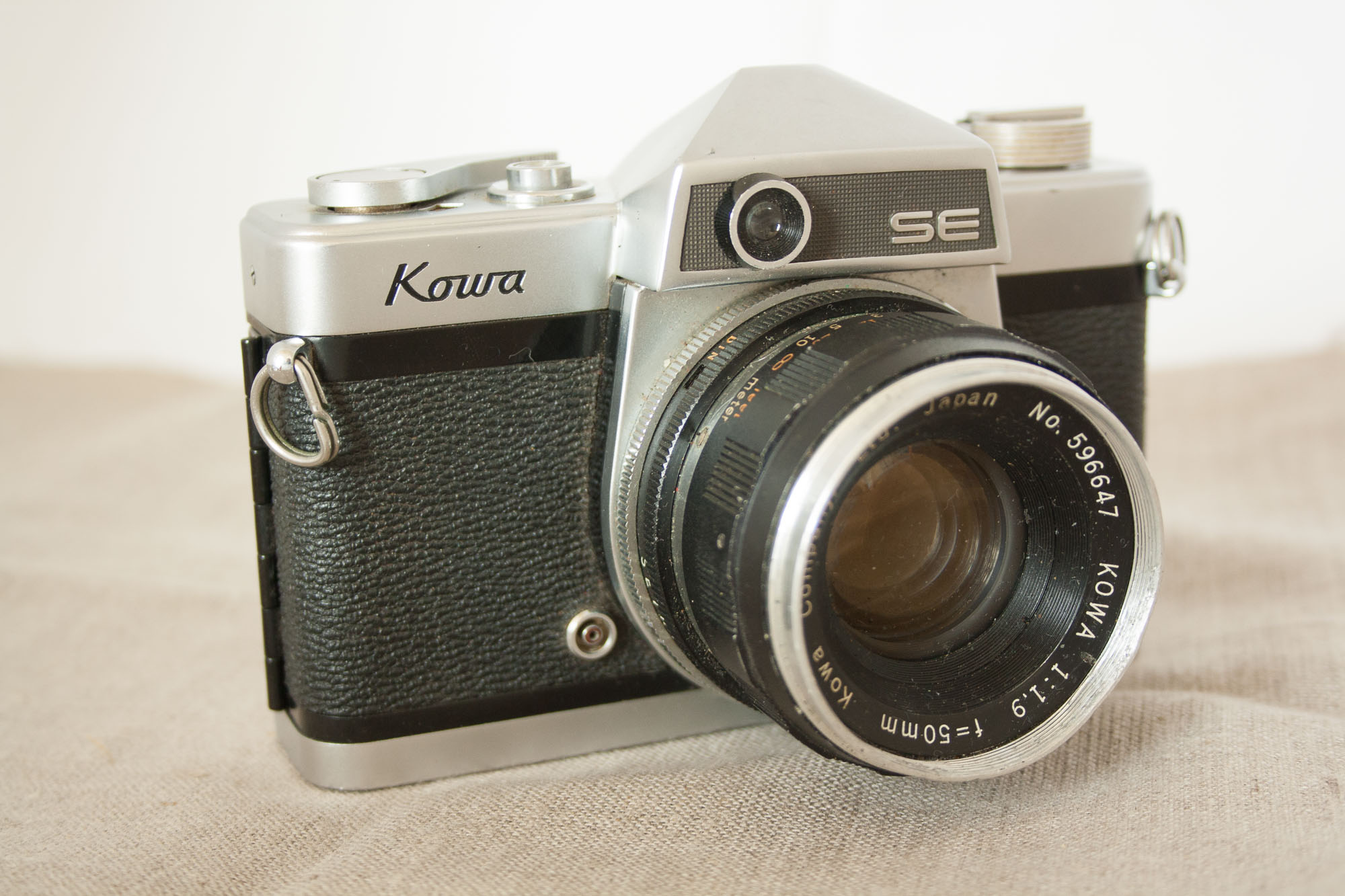 SLR camera from 1964, with integrated lens that cannot be changed. Requires a battery. Shutter doesn’t click and quick look around the internet suggests very little about how it can be repaired. It has a lot in common with Canonet by having most of the functionality automated, however it is heavier and less elegant. Honestly, not sure what I’m going to do with it.