Culture of cycling in Amsterdam 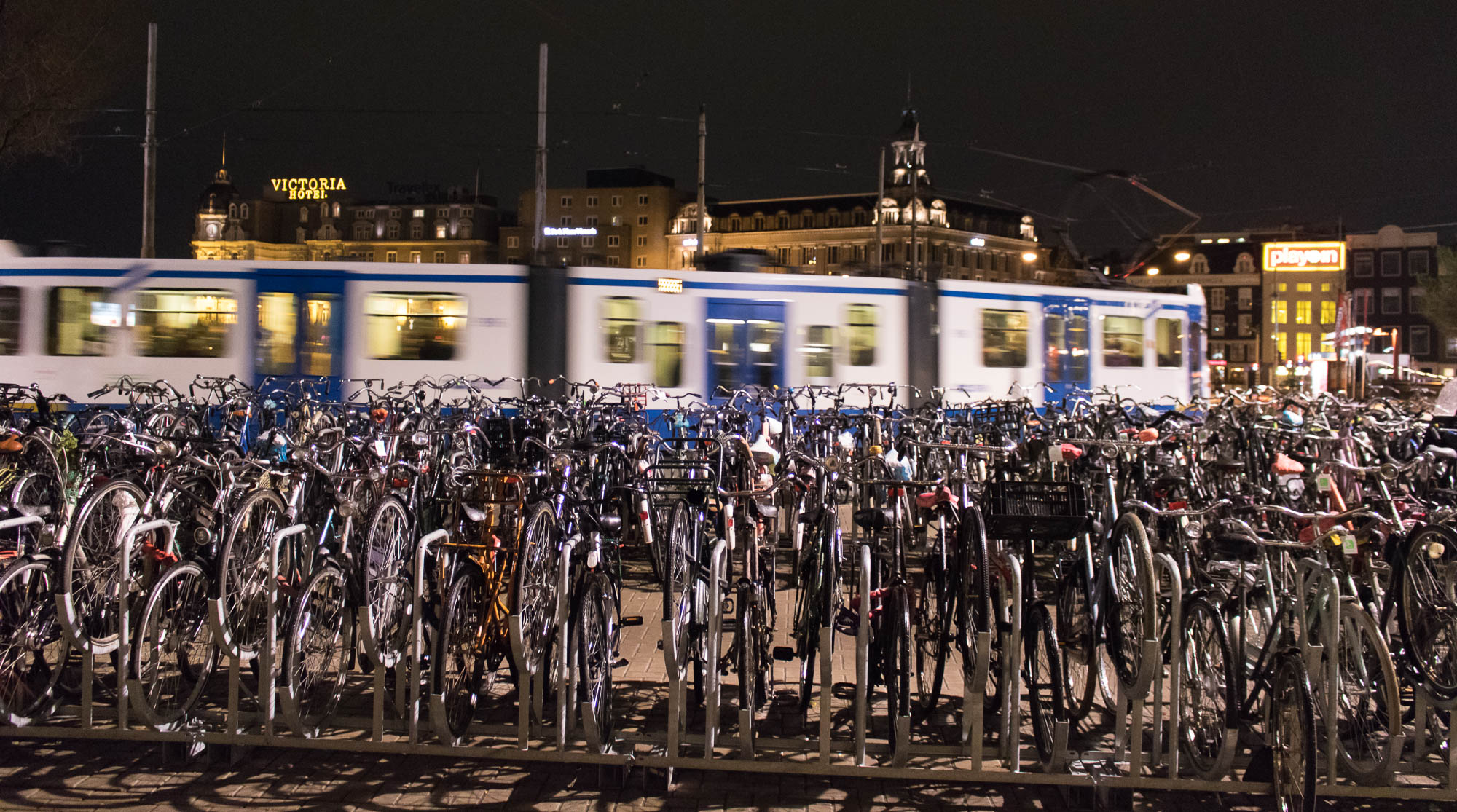 We’re back from Netherlands. Me and my wife Stanisla spent a week in Amsterdam, occasionally getting out of town. For both of us this is first visit to the Netherlands.

I generally read Wikitravel before and during the visit. Amsterdam is regarded as a heaven for cyclists. However if you read Wikitravel carefully, you might suspect that something is not right with the kingdom.

…cycling the Amsterdam way takes a significant amount of skill: the locals have been riding bikes from the moment they could walk and this informs their behaviour. If you don't feel entirely comfortable on a bike, it may be a stressful affair rather than the smooth ride you may imagine it to be. On top of that, if your lack of confidence makes you block pathways used by other people who can skilfully manoeuvre along them (e.g. groups of people, between stationary vans and the rows of bollards dividing street and footpath), who have appointments to make and jobs to attend, it can create tensions between you and locals.

I’ve personally been cycling pretty much all my life. Started as a kid, then moved to Finland, which is covered in dedicated cycling paths. It is a bit harder to cycle during winter, with all that snow - but Finns are very effective in cleaning cycling routes. At some point I was cycling 14 km each way from Espoo to our office in Helsinki, along the sea, on my hybrid city bike.

After we moved to London I was pretty excited to discover a city bike scheme. London is a huge place, but strangely compact enough to enable cycling commute for lots of people. They have rental bike station spread all over the zones 1 and 2. My initial cycling took 10 min to the office, then 20 min. Now we moved to a new place, and it takes me 40 min of relaxed pedalling across the town, every day. (I had to eventually give up rental bikes in favour of my own).

It seems that Amsterdam was planned to be cycling friendly place. However, this is not the case.

Right of the way

This is probably the most fundamental rule - if something is moving slower than you, it’s you who must give the way, or not endanger the situation. Faster moving vehicle assumes full responsibility over the slower moving subject in front. This applies in aviation too. When we do skydiving, everyone else must give us the way. That includes the Boeing Jumbojets.

Even if you have to use brakes.

Even if you have to dismount from the cycle and start walking.

Both of those options are widely practiced when cycling in London. You just accept it.

(yes, London also has crazy cyclists that defy any kind of rules, but they are mostly the exception)

The Amsterdam reality however is far from that. Cyclists in Amsterdam do not respect pedestrians. Yes, most of those pedestrians might be tourists. Yes, some streets are pretty narrow. Yes, tourists like to stop and take pictures. None of this gives you right to endanger the pedestrian.

Amsterdam streets are also poorly marked. Often there is only one path, and no dedicated pedestrian path. In London cycling on pedestrian paths is strictly forbidden. All cycles are forced on the road, together with the rest of the traffic. This way when you’re walking, you can feel safe and relaxed.

Not in central Amsterdam. I found generally walking in central town very stressful. There is always some cyclist passing a few millimetres away from you, with a significant speed. They do not ring the bell though. Crossing the roads is also hard - cyclists would never stop or slow down, even where I would be on the pedestrian crossing. This is a big NO NO for cyclists in London. I think you will be fined if police spots a cyclist not respecting the pedestrian crossing. (Yes, we do have cycling police).

A few times I would just start crossing the street (on the marked crossing) and see if a cyclist would slow down. They would never do such a thing. After that I started filming every crossing, just in case.

Cyclists in Netherlands also do not wear helmets. Apparently it’s a local thing.

London is a very busy place. So busy that they have 20 miles / hour limit for everyone in the central zone. Strangely, this makes cycling a lot safer since everyone are moving with more or less the same speed.

Apparently they don’t have speed limits for cyclists in Amsterdam. This might sound like a strange thing to say, but it is totally possible to cycle too fast. In fact, when you cycle in central Amsterdam, on streets filled with people, cars, trams and bridges, it is way too easy to cycle too fast. What is too fast? It’s when you will unable to react in time to prevent an accident.

In Finland we had a concept of a “common sense speed”. It is a speed you choose depending on the situation. I like this concept. The rule is only one - drive safely. So, pick a speed that you are comfortable with, that allows you to brake or stop if something unexpected happens.

Cyclists in Amsterdam are not familiar with this concept. They are driving as fast as they can. They also are not braking when making turns. Even if they cannot see what is behind that turn. I get it - they are locals and well aware of the landscape. But this feels like borderline arrogant behaviour.

Interestingly enough, the above described behaviour is mostly limited to Amsterdam itself. We did few trips out of town, and in town of Utrecht cyclists are much more respectful of pedestrians, driving with common sense speed and letting you cross the street.

I’m not saying they don’t know how to cycle in Netherlands. Most of the described rules do not apply when you cycle in a countryside, or a small town with no people. I’m saying that when you do cycle in a large town with dense population, you should be aware of the environment.

Otherwise it’s just tears for everyone.