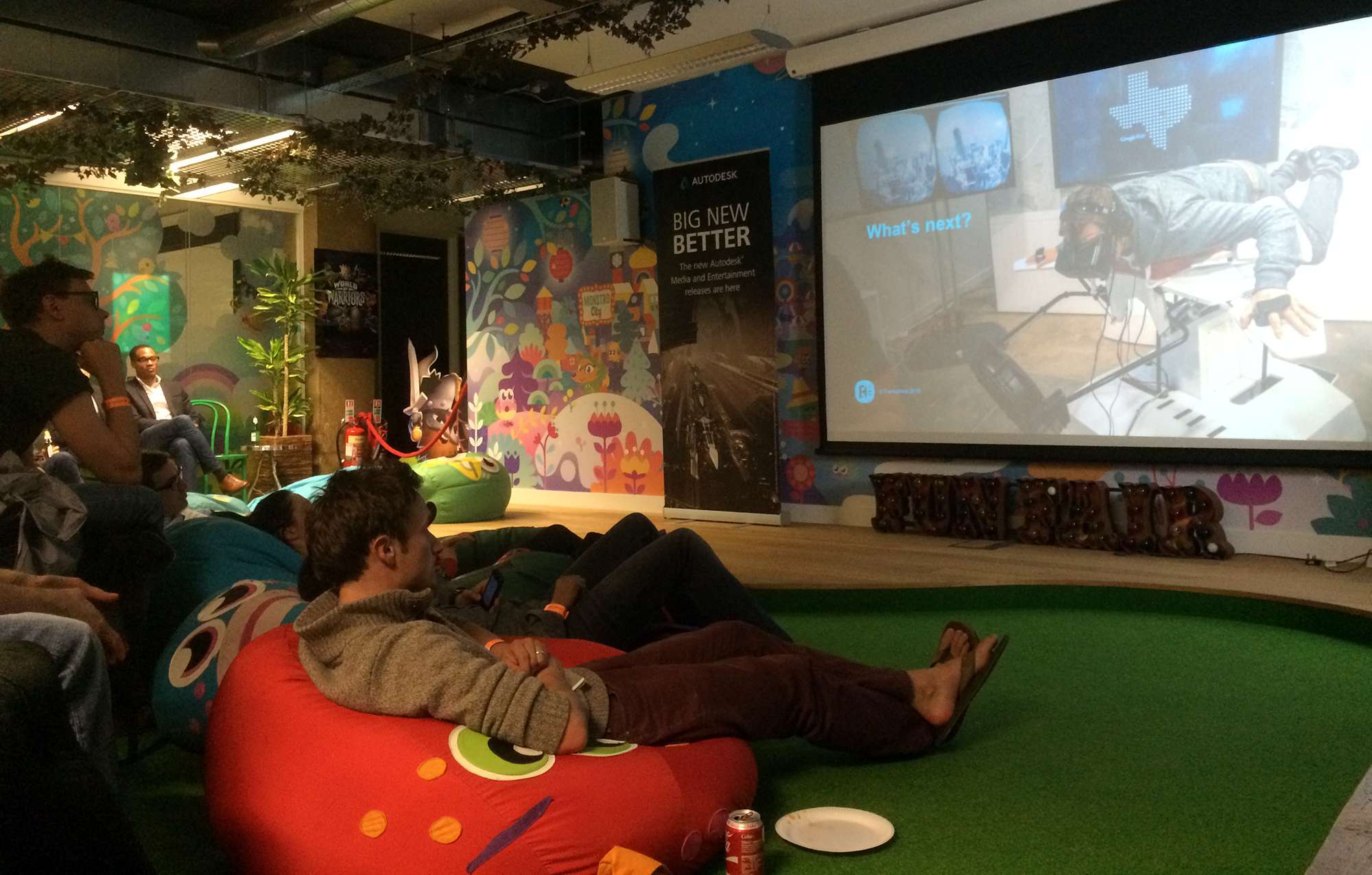 Second VRLO meetup happened last week, and it was a success. More gear, more simulations, heavy weight companies, and highly enthusiastic VR crowds. Mind Candy was once again kind enough to host this madness in their colourful office just a stone throw off the Old Street.

I managed to try quite a few simulations, two of which while being immersed into HTC Vive. So far my VR experience consists of Oculus Rift DK1 and 2, and Vive is a pretty good leap forward in terms of resolution - 1080x1200 per eye as opposed to 1080x960 on DK2.

The Third Floor presented a Vive simulation while also utilising Vive VR controllers - two of them for both hands. Apparently Vive headset is able to track them, which gives you ability to see your virtual hand movements, as well as being able to pick up virtual things and wave them in the air. I literally spent some time just waiving my hands around. Funny moment was that after each session someone had to put the gear on and put all the virtual objects back to their places, ready for next player.

Vive simulation consisted of a ping pong table and a robotic opponent. Simulation would ask you to press buttons with your hands, pick up the racket, and play ping pong. Then you would gain access to a pong gun, which you could shoot at the moving target.

You might never heard of The Third Floor, but they are the guys making previz work for big Hollywood blockbusters. Currently merged with Framestore. Gravity, anyone?

Framestore were present too - they did a talk and were showcasing Avengers simulation on Samsung Gear VR. Which was pretty cool. They are quite serious about VR experiences, and are saying things like “game engine is the king”. Which is very much true. 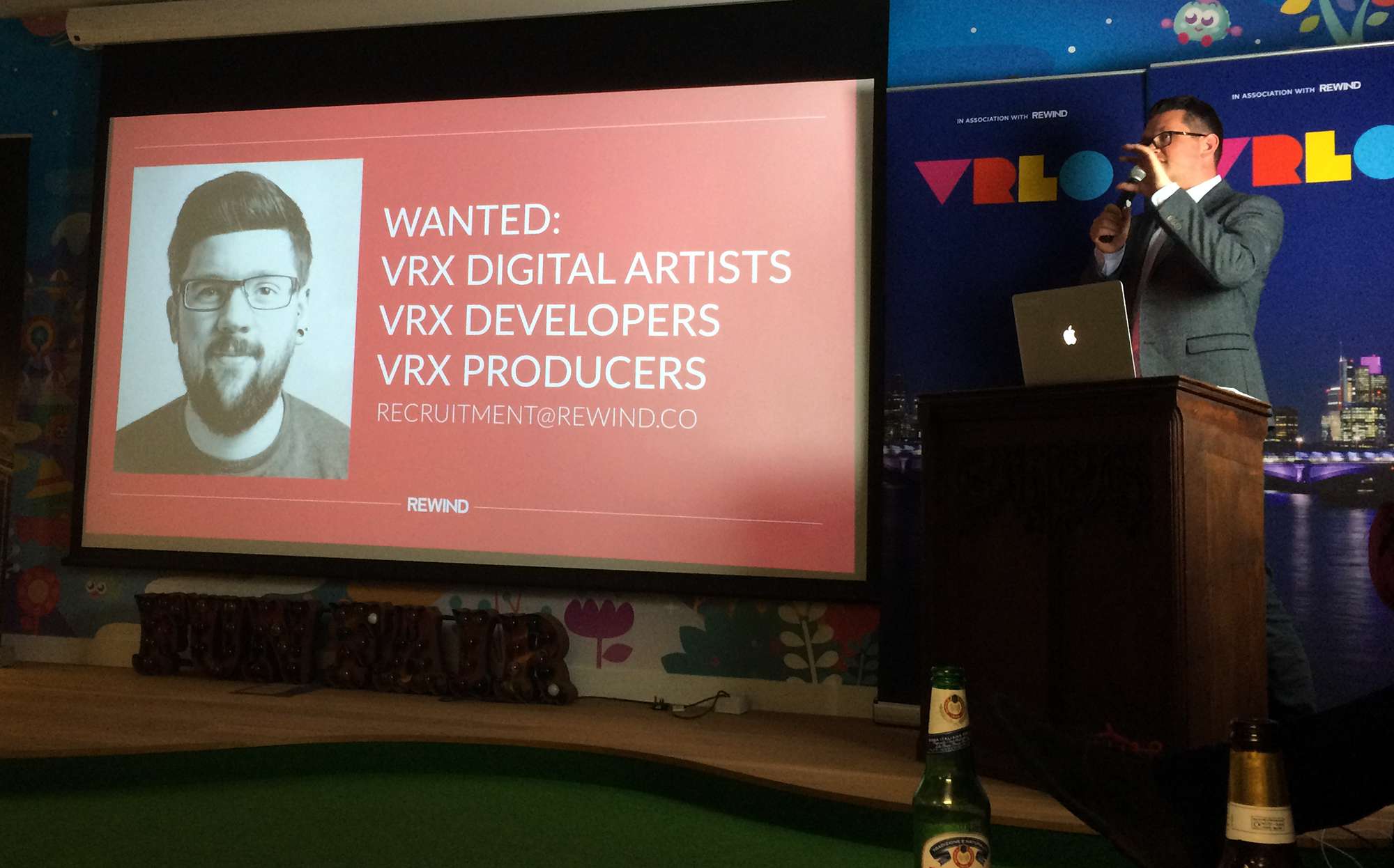 Another big studio was The Mill. They went after an alternative approach to interactive storytelling and presented a short 360 degree film which you could watch on an Android tablet. You’d move the tablet around and reveal more of the film as it envelops you in action. I quite enjoyed it, especially when sound would play a nice part suggesting which way to look.

Interesting development in wearables was presented by a company called Pretender Motion. They would attach a special sleeve to your hand, and then one of them would control movements of your hand. I know, right? One of them would wear a similar kind of gear, and hand movements would trigger some sort of electro magnetic impulses targeted at muscles in my hand. With some strong tingling sensation my hand would start mirroring movements without my personal participation. Not much details on the actual tech behind. They are going to try and target VR games as a physical feedback kind of thing.

Inition presented a something I’d call a correct direction into VR filmmaking. Their simulation was a 360 degree spherical stereoscopic film of a London Philharmonia Orchestra performing a classical piece. You’re standing just in front of the director and are free to look around. They are claiming to produce a consistent stereo depth across the image with little stitching errors. It was pretty good I’d say. Sound was following the image, properly binaural, originally recorded with 8 channels and dummy head.

Also played Crystal Rift while wearing Vive. It gives you a new perspective to dungeon crawlers, and is quite entertaining - especially once you master the controls.

Guys behind VRLO meetup are still full of enthusiasm and I can only expect third meetup coming in some near future.