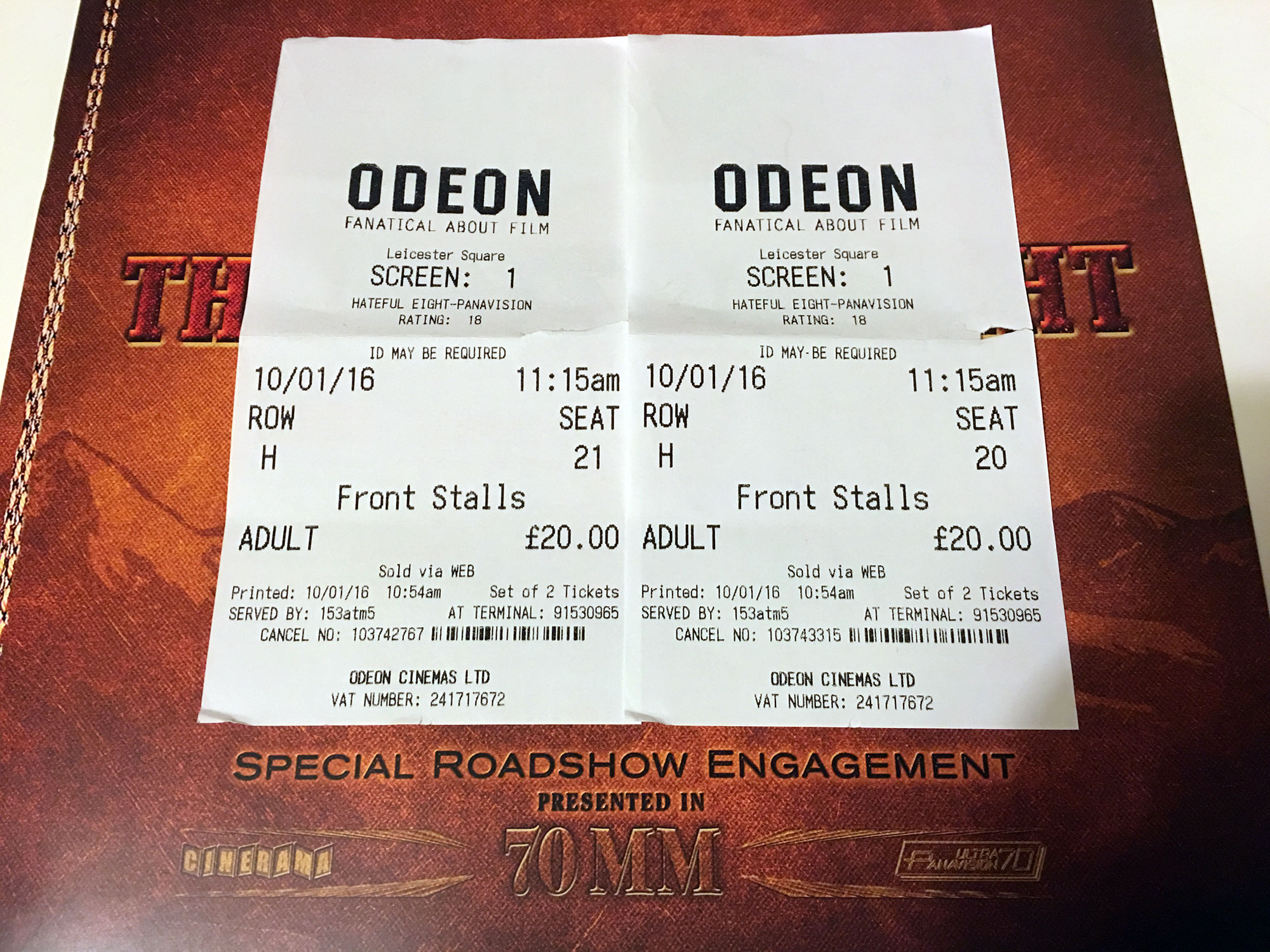 London is a dream place to be if you love cinema. Not only you get to stumble on film sets while biking to the office in the morning, but also there are all sort of events and places to watch films. Last year Christopher Nolan released Interstellar in IMAX 70mm 15 perf format, which is considered biggest frame size resolution-wise. It is rather awesome, but most of cinemas including IMAX are not equipped anymore to project such stock. BFI IMAX was literally one of few places to do so in the country.

Tarantino was apparently impressed by another rare film format - ultra wide Panavision. With the aspect ratio of 2.76:1 it was originally projected on a curved screen using 3 synchronised projectors. If memory serves me, they also originally shot films by using 3 x 35mm cameras with conventional 4x3 aspect ratio. This proved to be highly inefficient and was later replaced with a single camera, anamorphic lenses and 65mm film. Only 10 films were released so far in Ultra Panavision 70 format between 1957 and 1966. Hateful 8 is officially 11th film to be released in this rare format.

As Tarantino explained, considering the rarity of format it would be naive to think that film would be released across the world in Panavision 70 only. However you could do a so called roadshow - special event with overture, intermission, specially printed programme and extended version of the film. This used to be a thing back in 1960th, and sort of died nowadays. It was back in a time when audience would put on a dress when going to cinema. There are 5 locations in UK currently screening Hateful 8 in Panavision 70, and London got one of them - Odeon on Leicester Square. One of the very few 70mm projectors in town was put back to work.

Leicester Square is full of cinemas, even its tube station tiles made to look like film. I’ve been there precisely twice, both times before we actually moved to London. This city is full of amazing cinemas, but in all the honesty, Leicester Square is not the place to be. I guess my biggest beef with Odeon is the size of the screen compared to the size of the auditory. Nowadays all modern cinemas feature steep stairs and seating plan raising up - at the same time not too far from the screen itself. In the old days the screen was considered large enough if you could see it from the back. In Odeon Leicester Square when you sit at the very back of the cinema, you can cover the screen with your thumb. This was probably ok back in the days, but by modern measures you are suppose to be immersed into the screen (and sound). IMAX is the obvious example, but also Vue and Cineworld are following this idea with super large screens.

Speaking of old school cinemas - one of best and most authentic cinema experience in London you can find at the Olympic Studios in Barnes. A former legendary sound recording studio, nowadays refurbished into a most beautiful place to watch films. They also have Dolby Atmos. Red curtains are something like straight from David Lynch films.

Screen size at Odeon Leicester Square is decent, but far from being huge. You have to compensate this by sitting closer to the screen. It is also not curved. To accommodate ultra Panavision aspect ratio of pretty much 3:1 they had to crop the screen from top and bottom. In practice this means you’re getting less screen space compared to the conventional aspect ratios - 1.85:1 or 2.39:1. In all the honesty there aren’t much original ultra wide screen cinemas left in the world. Wikipedia lists 3 of them (one is surprisingly located in West Yorkshire, not so far from Leeds).

Before start of the film there was something called overture. It’s again part of the old way of screening films, before ads and trailers. Overture would be printed on film with music, and would be projected while people are taking their seats. Music would also be part of the official soundtrack of the upcoming feature, putting audience into a proper mood. In practice however Odeon showed normal batch of ads, followed by trailers to all sort of films, including Batman vs Superman and Independence Day 2. Generally this part takes up to half an hour, at which point the audience is properly tired and waiting for the film to start. This is when overture kicked in. I’d say it was 3-4 awkward mins of music and a static picture. Unless you have read on history of cinema, you would be properly confused at this point. 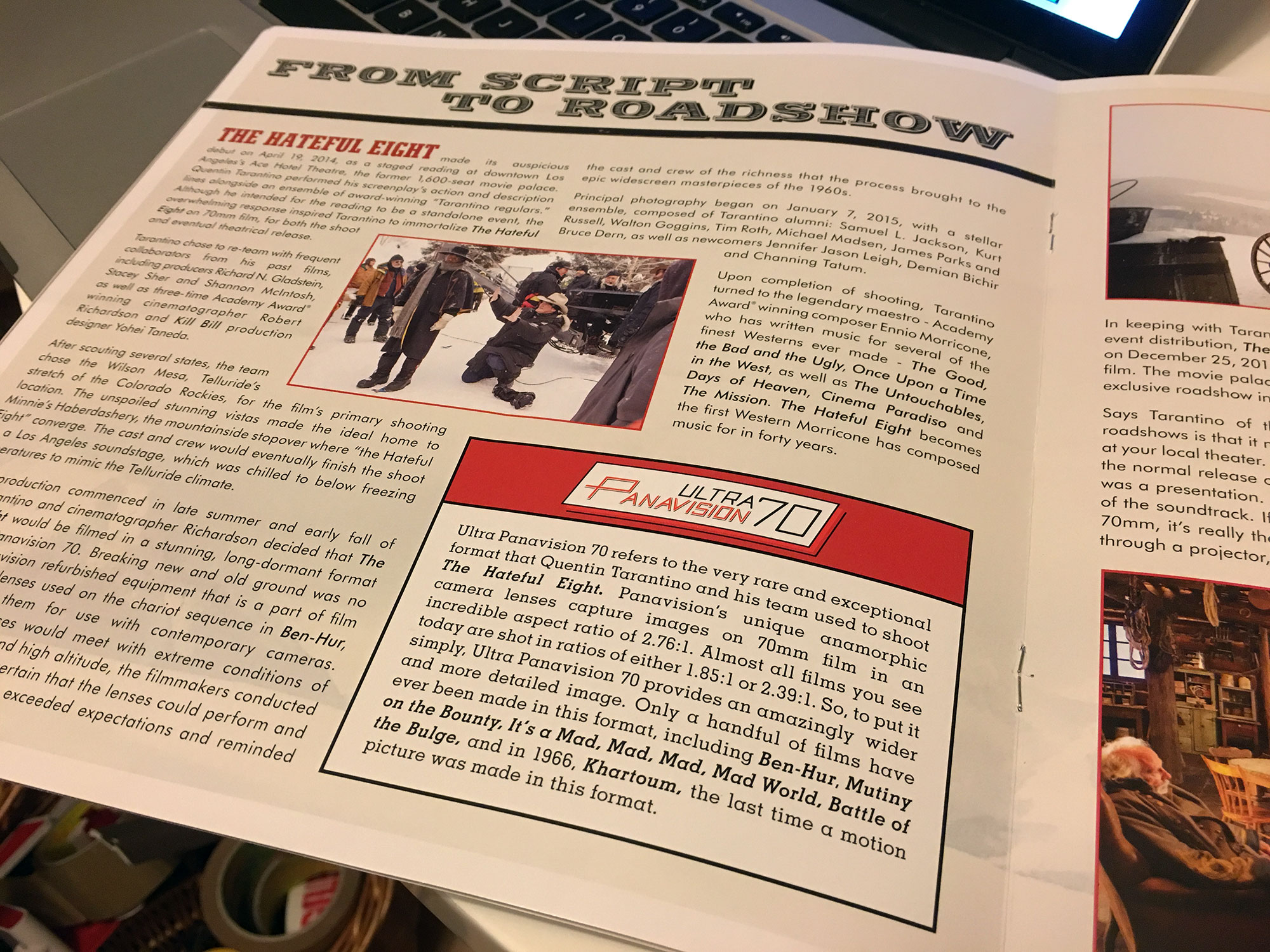 Film starts with a bright snowy landscapes, and this is where another curious thing happens. The way films are projected on the screen is that half of the time you are watching darkness. A single frame is projected for a fraction of a second, then a rotary disc shutter closes the picture, film is advanced forward, and a new frame is projected. This happens 24 times a second, which gives you, well, 24 fps or 24 Hz refresh rate. This also produces a noticeable flicker. It is especially present on bright pictures. Like snowy landscapes, which are effectively bright white light flickering at 24 Hz. In digital cinema flicker doesn’t happen - pictures are still changing 24 times a second but the part when screen would be dark between pictures is absent nowadays. Our brain is smart enough to adapt to film flicker, and it was perfectly fine with it since the invention of cinema. Somehow for the past years of digital cinema I forgot how proper film flicker looks like. This is probably also true for Tarantino - otherwise he would put less bright scenes in the beginning of the film, or would even abandon idea of snowy landscapes completely.

Most of the landscapes are shown during first quarter of the film. After that we arrive to an undisclosed location, and the rest of it happens indoors. It is well shot, and things are often put in the opposite sides of the super wide screen. But for me indoors action doesn’t justify the chosen format. It could as well be shot on 35mm. Once Upon a time in the West is shot on 35mm, and it didn’t made it less epic. Most of it is shot outdoors, occasionally featuring places like Grand Canyon. Funnily enough, they share the same music composer.

After about 2/3 of the film it was intermission time. Lights went on, and people started moving. I have to mention that Odeon Leicester Square was full on this day. Considering that length of the intermission was about 10 min, queueing to the bathroom or getting more refreshments before the film would resume was out of the question. However everyone decided to try. A stranger dude next to me brought a big plate of nachos about 5 min into the part 2. Pretty soon he regretted his decision.

You see, part 2 is when all the bloody action starts happening. Film suddenly becomes very brutal, and this is when you recall R rating. Nacho dude forgot about his meal until the end titles. I was strongly regretting we haven’t left the cinema during the intermission. Watching bloody violence on 70mm ultra wide Panavision is not great. It’s pretty awful. I generally not able to enjoy such scenes - but then again it could as well be intention of the director - to shock the audience. In which case it indeed worked.

I deliberately waited a week to write few notes on Hateful 8 roadshow. For an attempt to revive old film format I give props to the team of filmmakers and Odeon. For the film itself - well I’d rather see something else. I’m one of those guys believing that cinema is suppose to deliver you into a state of something transcendental, enlightening, higher realisation. Something cathartic. Interstellar used 70mm 15perf format to achieve this. Hateful 8 didn’t.

And I’m going to West Yorkshire to see some more of Cinerama.