Couple of weeks ago we moved from Bethnal Green to Walthamstow, and it was our first big move inside London since we moved here 2 years ago from Finland. E2 to E17. All post indexes are indicating direction from the central London, and in a way by a greatness of number you can tell how far it is.

I remember the original plan when moving here was to find temporary small place, cheap but not too far from the City. Something around £800 / month. Meanwhile we’d settle down, save some money and move on after 6 months or so to a more decent place.

There were few fundamental flaws in this idea which I didn’t spot originally. To start with, lots of people are flatsharing here. If you’d be up for a shared flat, it is possible to find a room for under a grand / month. Decent room would cost around £1000 and would be located in zone 1-2. There seems to be a hidden agenda of most agencies to get people into flatsharing for as long as possible, hence driving rent prices even higher for a single flat.

Separate decent flat with 1 bedroom in zone 2 starts at around £1200. There are obviously anomalies for less, but there always will be something wrong with the place. Or you are simply very lucky person and landlord needs to find a tenant super fast. Our previous 1 bedroom flat in Bethnal Green was 1230£ / month. Plus £77 council tax - which is quite low by local standards. The reason being that flat itself was tiny. Living room was effectively combined with kitchen, and bedroom was a size of a good clothing cabinet by Finnish measures. There was also a nice view towards skyscrapers of the City, and a ridiculously short commute of 10 min on a city bike to Old Street. 20 min to Clerkenwell.

Another thing is that most of contracts start at 12 months minimum term. If you decide to move earlier, you have to keep paying the rent until landlord finds a new tenant. After first year you can continue living in the same place without contract renewal with agency - there is a law about automatic tenancy continuation, but the agency will try to get you sign contract renewal for extra fees in the end of each fixed term. In any case - finding a temporary place for less than a year is hard.

We ended up spending 2 full years in our flat at Bethnal Green. It’s a decent solution for an “outgoing” type of life, but doesn’t really offer any perspective. Towards the end of 2015 Stanisla started looking for a new place. Flat hunting is another sensitive topic for any person living in a sizeable megapolis. Stanisla was spending every free minute online, refreshing new flats and sending out viewing requests. A decent option would quickly gather lots of people willing to see it, and agency would arrange a “pillow fight” day - when all 33 people would show up at the same time to view the property. We were aiming at something with 2 bedrooms and some sort of a private garden. Such properties would start at around £1400 in zone 3. Add council tax of about £150, higher utility bills and £140 monthly cost of a tube card.

After some months of fruitless search I remembered that most of badgers of Red Badger are living in a fairytale place called Walthamstow - with some exceptions living in Leyton. Stow is a bit off town, still zone 3, with a Victoria line and overground trains straight to Liverpool street. One of my wishes was also bikeability to the office. Google Maps promised that you can indeed bike in under an hour from Stow.

Stanisla kept looking until Christmas when she had a breakdown and thoughts of doubt about finding anything decent for a remotely affordable price. Then suddenly after New Year holidays she found this place - 3 bedrooms, small private garden, 5 min walk from overground and tube stations. £1325 / month.

There is a lot of bureaucracy involved when trying to rent a flat. Generally, if you like the place, the process goes as follows:

In our case the agency ringed me 10 min later and told that they gave us wrong keys. At that time we were choosing nesting box at a local Wilko.

Moving within boundaries of London turned out to be easy. There is a special online service where you describe scale of the disaster, and men with vans are competing to provide best price and promise of a service. Stanisla honestly described 11 cast iron sewing machines, 4th floor of the original flat and lots of heavy boxes with books. She also mentioned that she will not be carrying boxes. We went on with the proposal of 2-3 men with big van for £300. Feedback thread was full of “amazing service” and “polite movers” messages. We pre-paid £60 and agreed on 8am Sunday to start the operation. Another slot would be 2pm, and that’s because they are moving 2 houses on a normal day. Impressive.

Saturday we spent packing everything that wasn’t already packed by Stanisla during previous 2 weeks. Our tiny apartment featured quite a lot of stuff in the end. At some point we ran out of boxes and did a trip to the local Tesco. It didn’t sell any moving boxes, but they had bunch of boxes just lying on the floor ready to be thrown into rubbish. They gave us all boxes for free as much as we could lift. 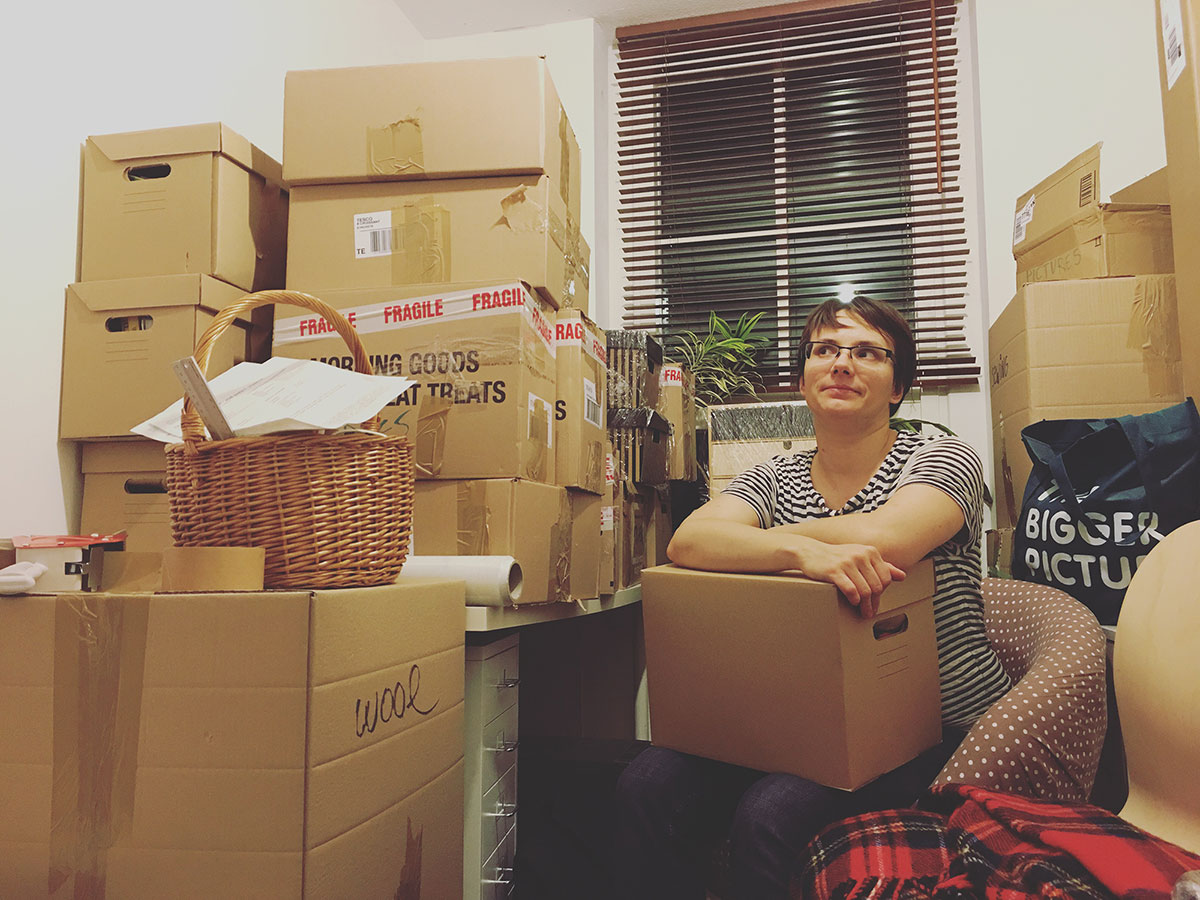 Men and van arrived perfectly on time, loaded all boxes, furniture and sewing machines into a van in about 2 hours. First part was tricky since you had to climb all the way to the 4th floor. As they were carrying boxes, we cleaned the place and threw the rubbish away. Then we moved to Walthamstow, where they unloaded everything in probably less then one hour. Stanisla was steering the unloading process by guiding boxes into correct locations. It was before midday when the operation was fully completed.

After a week here this seems to be a huge success. Area is very nice. We met our neighbours and they invited us to a local concert of classical music. We actually went there - it was in the old church on the other side of Walthamstow, proper 2 hours concert with drinks during the interval.

We have 4 rooms now with quite a bit of potential. 2 of them are quite tiny, and 2 others are slightly bigger. There is also a garden which we can observe but cannot visit - door is completely stuck and would not open. Apparently it’s a common issue during winters.

I’m getting a dedicated mancave room. Considering about “VR research” sign on the door.

We also found an attic, which was completely unexpected. Thanks to the fact that we’re living on the top floor, there is a proper attic with lots of space. It is so big that someone could probably sleep in there during summer.

Kitchen is also alright. You can actually sit in it and have some lunch.

I will write a separate post on changing address with banks, services and utilities. Stay tuned.