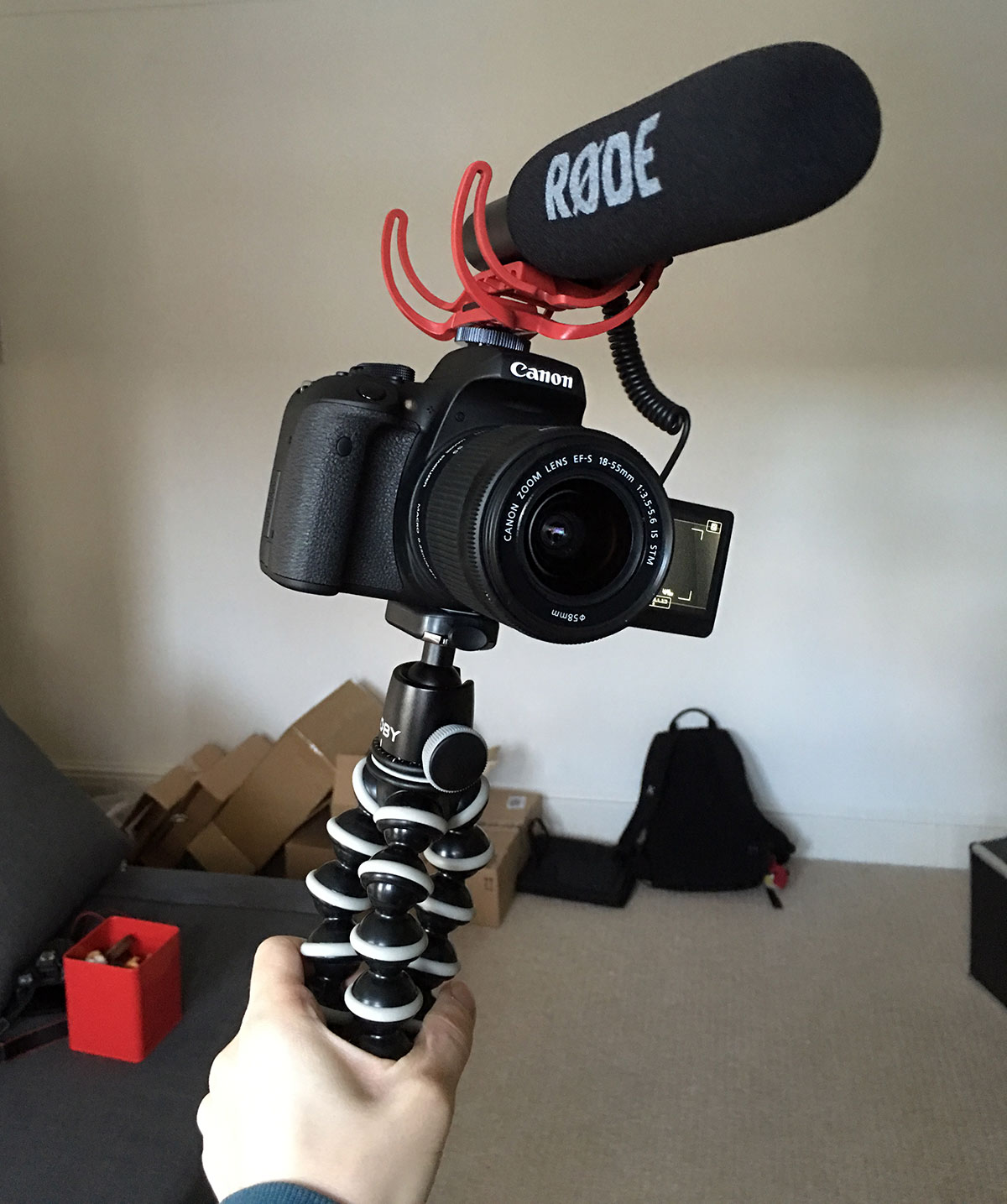 During our recent trip I’ve tried making and posting short video logs every day for the whole duration of the trip. It turned out to be 8 days long, and hence 8 episodes of the vlog are now available online.

In a way this felt like a filmmaking hackathon. There is only one basic rule - every night you must cut and release new episode whatever the cost. On average post production on each episode took about 2 hours, which often meant I had 2 hours less for sleeping. Nevertheless, it was a huge fun. Two of my colleagues - Roman and Kadi - were on the same trip, and luckily tolerated myself pointing camera at them and occasionally stopping in the middle of the busy street to film random things.

In this blogpost I want to gather some ideas and words on how it all went. And maybe put a few notes on future improvements.

I’ve used new Canon EOS 750D camera attached to Gorillapod, with external mic by RØDE. The mic turned out to be much larger than I anticipated (always check the specs!). It also required its own 9V battery. This led to 2 consequences:

I generally aim at the least attention on the streets. DSLR camera itself doesn’t draw looks anymore, but having a huge mic attached to it does change things. Suddenly you are perceived as a videographer, and a professional one. This eventually led to the fact that I mostly used the big mic indoors only, and reverted to the built in mic for streets. It worked rather well, except when it was really windy.

Combination of 750D with Gorillapod (and Joby’s head) was a huge success. I had no camera strap, and carried camera by having the tripod in my hands all the time. This turned out to be quite handy. At any moment I could quickly setup either a handheld shot, or put the tripod on the ground and film timelapses. Each of the Gorillapod chains on its legs also contain rubber rings which makes it super reassuring to hold with just one hand.

750D can shoot full HD video at 25fps. As usual it packs it into H.264. Not exactly cinema grade, but more than enough for YouTube HD. Having a photo lens in front actually contributes to cinematic experience much more than uncompressed 12bit colour - you can have selective focus and nice blurring any time you want.

This leads to another issue - focusing. In the beginning video capable DSLR:s had no auto focus whatsoever. This camera does feature automatic focus during the video. It is however not great. With handheld filming you often end up shooting something close, and then changing perspective to a landscape. It takes a few seconds for the camera to figure out that the scene has changed, and another few seconds to adjust the focus. What can drive you mad is that first camera tries to adjust the focus the wrong way, and then goes all the way back, slowly.

Auto focusing is even less reliable in the night. Bright lights confuse it a lot.

I ended up pre-planning shots in my head and then often switching to the manual focus and using focus ring on the lens. It takes a bit of skills to operate it fast, but it does work. Another life hack is to turn the auto focusing off and then on again. There is a touch button on the viewfinder for this specific purpose.

All music is Creative Commons and is from Soundcloud. Their advanced search is not super great, but it does allow you to search for tracks that allow you sharing and re-using. Soundcloud been my source of nice free music also for all the podcasts.

All the editing is done in Adobe Premiere. It is possible to use pure trackpad for that, but I think having a mouse speeds things and precision a lot. Despite editing fast you still want the video to be cut precisely on the music beat.

I’ve spent roughly half of the time doing draft cut, and then going over it again and cutting out all the unnecessary parts. Generally each episode is 5 to 9 min long. As some directors say, cut away everything you absolutely can’t live without.

We’ve spent most of our trip around San Francisco area. Our base was at Inner Richmond, which was a very nice an quiet area. Central city is much weirder and felt less safe. A friend of mine after seeing the rig asked me to take an Uber (it was late) and not carry it around the city.

Having two friends more or less constantly around helps a lot to feel safe when strolling Mission district at night. I think there was only couple of occasions when I was only by myself, and on one of those a stranger old women came to me and started asking with a huge suspicion in her voice why am I filming wires on the street?

Constructive feedback on the structure of episodes was mostly around things that I’ve accidentally promise on the video and then would never show. Obviously we had no script and everything was just happening and I was filming whatever was around. I also tried not to film the food we were eating, conference we were attending, and the concert we were going to out of town. On occasion the episode would become more or less random.

I think structure is something that should be improved going forward. The aim is to produce a small film every day, and film does imply certain rules.

I’ve certainly enjoyed doing this. I’m not going to do this every day. But on occasions I think this is a great way of having fun.