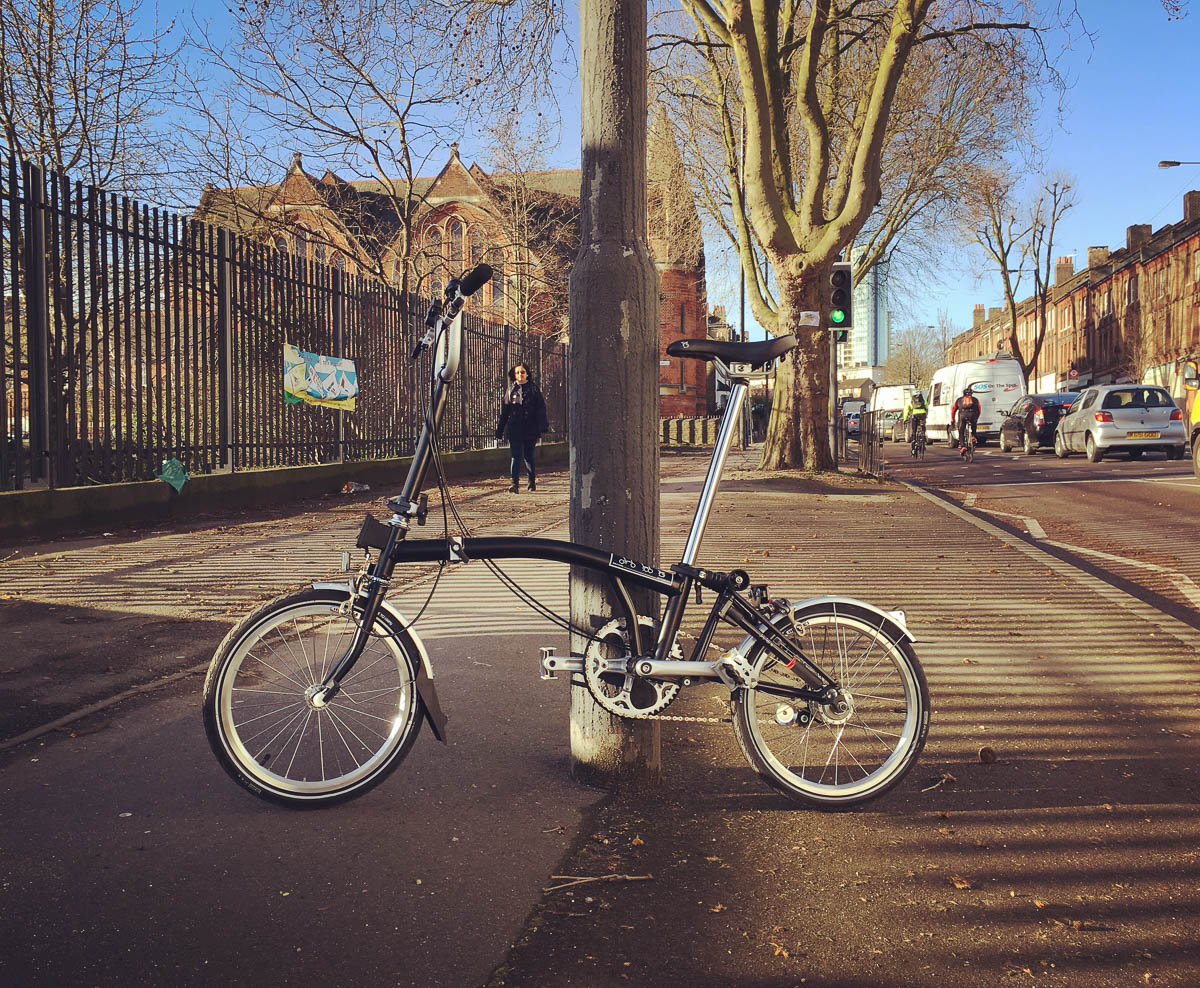 This post was not sponsored by Brompton. I bought it with my own money.

Brompton is a locally made brand of foldable bikes. They are praised for easy folding and tiny amount of required storage space. They are also very well built and suppose to last for years. I’be been biking all my life but never owned a foldable before. You can see Bromptons everywhere, often with well dressed people riding them around City. Because of a small size you are allowed to take it on board of tube and trains during rush hours. It can also be considered a proper last mile vehicle - more than often during bad weather I’d take a tube and then jump on a bike to quickly get to home from the final station.

In March 2009, Brompton Bicycle achieved a record monthly turnover of just under £1 million; the employees were rewarded with fish and chips.

The company is actually very small and very local. Original design was invented in 1976, and hasn’t really changed in the past 40 years. They increased amount of accessories, frame colours, and there is even optional titanium upgrade which will cost extra £600 and will make the whole thing about 0.74kg lighter. Everything is assembled in London from mostly unique parts.

Bromptons are pricey. Base models start at around £700, but with bare minimum set of options you are looking at £900. If you want a colourful body (as opposed to the basic black), and, say, original travel bag, it easily goes over a grand. I went with 3 speeds, mudguards and default black body set.

Now, if you’re a UK resident, there are couple of lifehacks that can provide you with a significant discount on a new bike. First is so called Cycle Scheme - a legit tax evasion scheme which can give you up to 40% back. There are a bunch of catches in order to qualify for one, but it is fairly popular way of getting a bike. Second option is related to private health insurance. Your employer might have you enrolled into one, and that insurance might offer you cashback on new bike. In both cases there is a hard limit of about £1000 for a full price of a bike. But that will give you a new Brompton.

The bike is unlike anything I’ve ridden before. Proportions are vastly different from any conventional bike. Wheels are small. Steering feels very unsteady in the beginning. Pedalling with only one hand (or - look ma, no hands!) feels impossible.

It is also fast. I’ve been hopping on and off the city bikes around London (they also feature 3 speeds), and by all means top speed of Brompton is much faster. 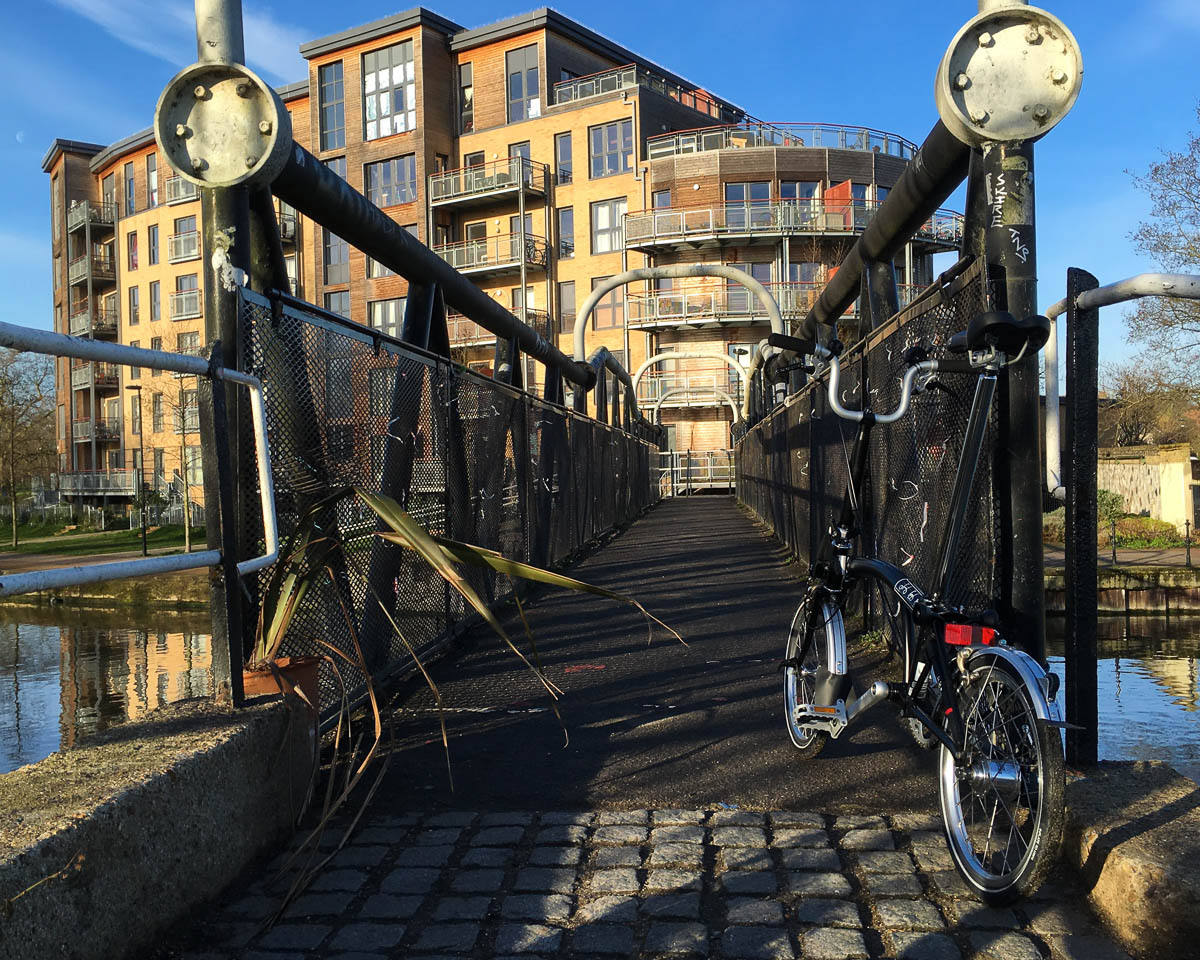 Speed combined with unsteadiness and overall lightness of the bike is an explosive combination. If weather is particularly wet on a day, it becomes even less steady. You’d want to avoid pebble roads, old brick roads, and anything with uneven surfaces and ditches. When making sharp turns, there is a small chance of hitting ground with a pedal in lower position. It’s a nasty way of loosing your balance.

Just like learning how to ride a bike, none of that will matter after a few weeks. I can even ride it with no hands now - not for too long. Except from pebbled roads - they are quite unforgivable and very uncomfortable to ride even in dry weather.

This bike features a way of rolling it around when it is folded. There are 2 rolls behind the seat and one more small roll on a back mudguard. With those 3 rolls you can get folded bike rolled from one tube station to another. 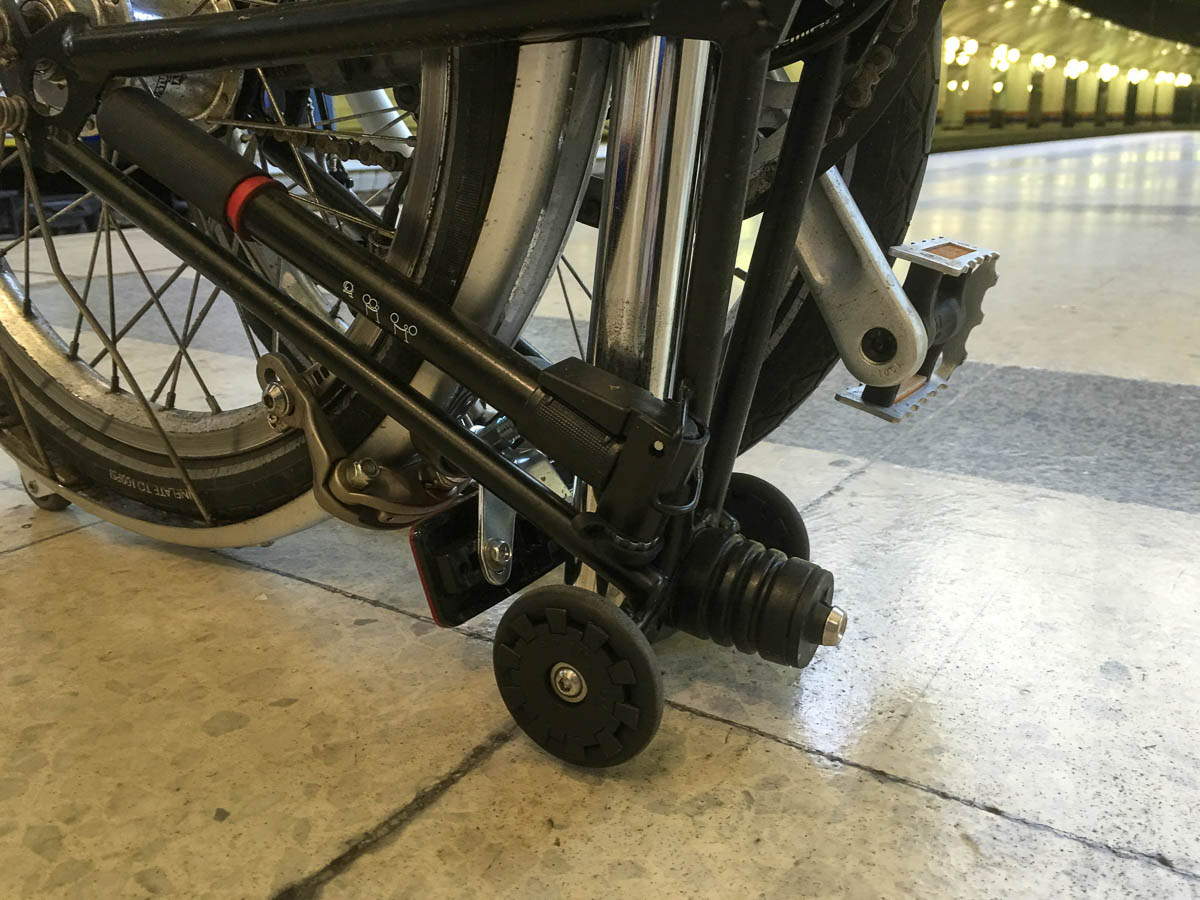 However, default wheels are not meant for prolonged use. They are very small, not very good at rolling, and any uneven surface will be a problem. First time I was rolling folded bike around the tube stations, one of the locking pieces (which also is a suspension) broke away and was never found again (replacement cost: £12). 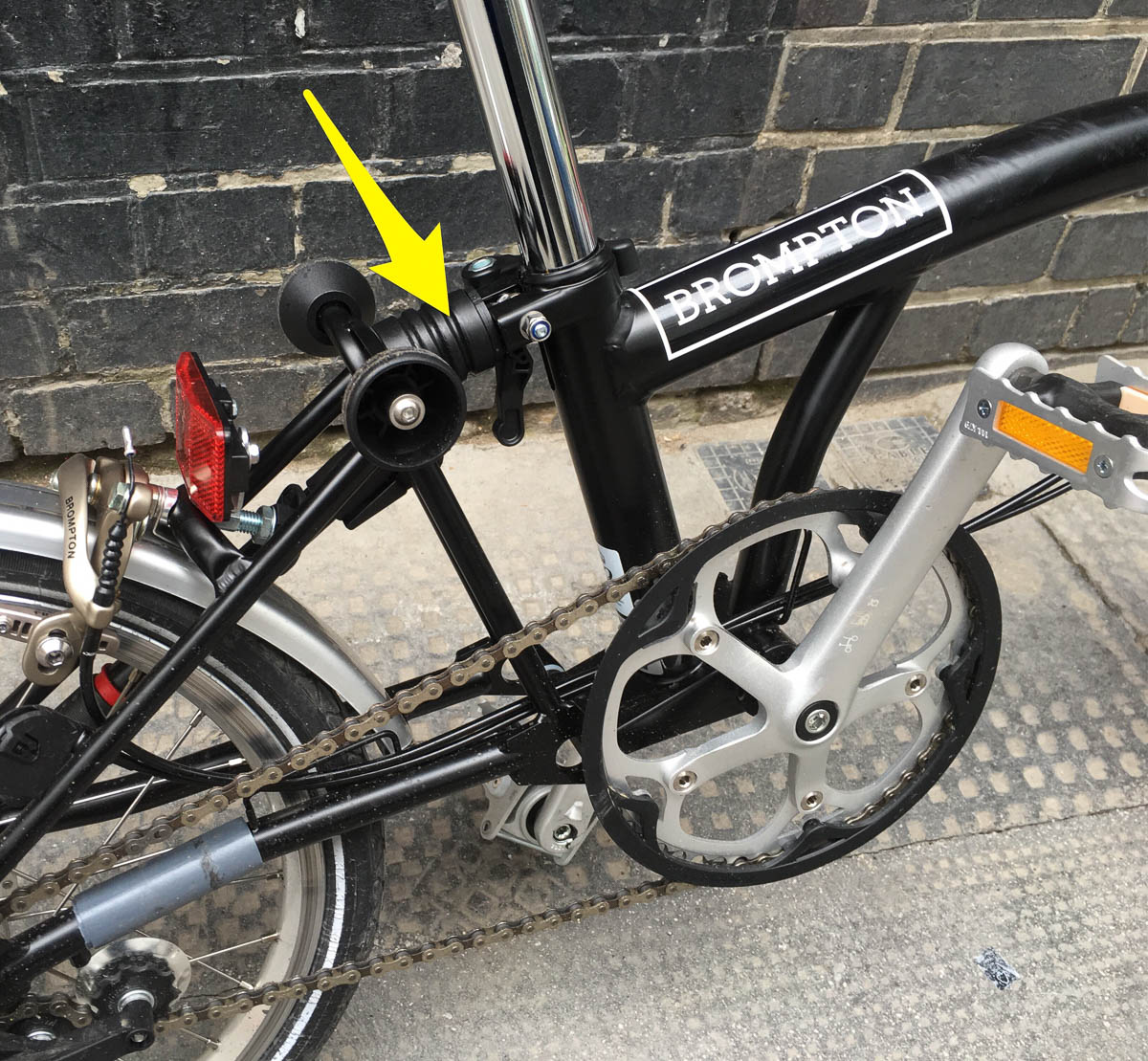 What you can do is get better wheels. Apparently wheels from most rollerblades would fit just fine. I got official Brompton “Easy Wheels” for something like £20. They are larger and actually meant to be rolled. To be fair, I would expect them to be installed by default. The bike weight is around 11kg, and ability to roll it is very important.

Train and tube stations in London are famous for being wheel chair unfriendly. They are full of stairs, sometimes circular stairs, long corridors, and, of course, crowds. With foldable bike you suddenly get option to jump on a public transport whenever you feel like it. This in turn requires some technique. 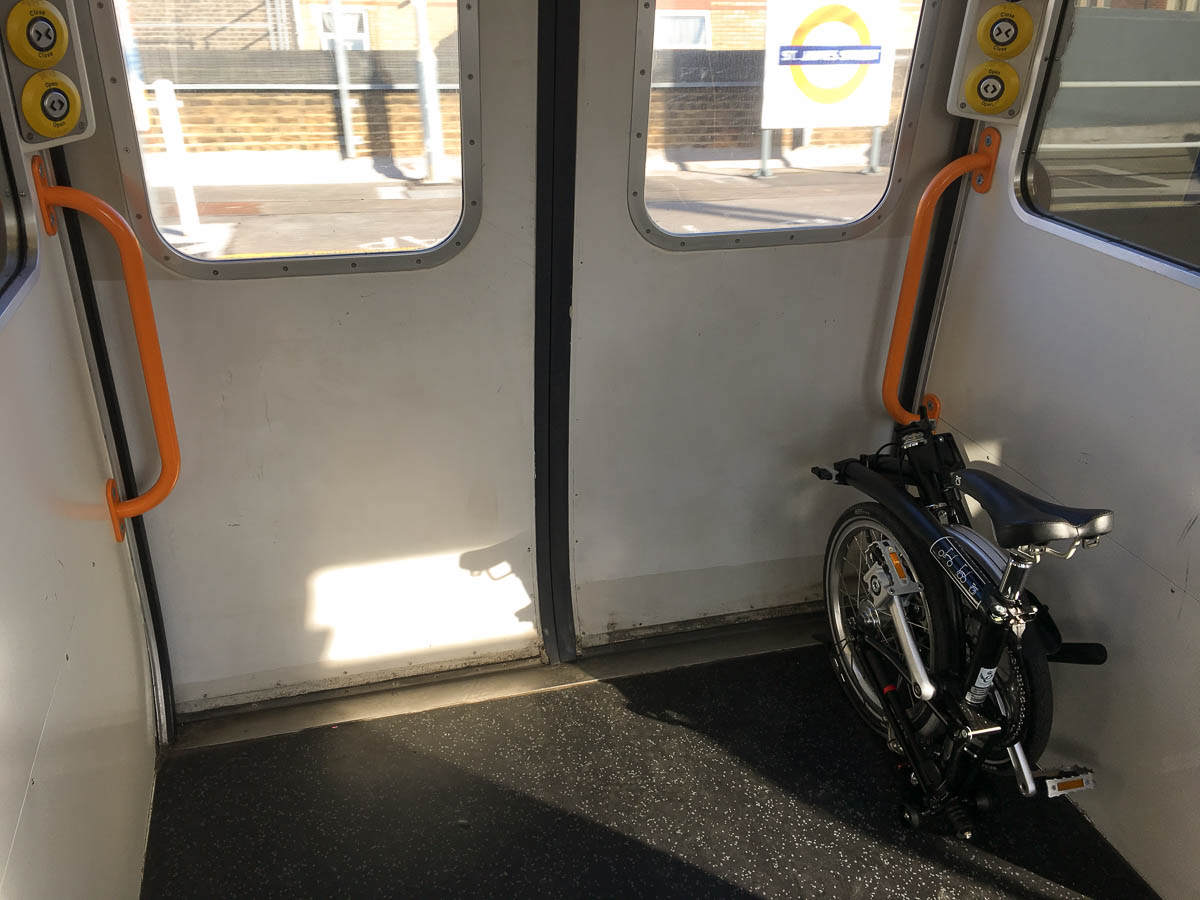 It is possible to carry the bike while folded as well as in full unfolded mode. Overground is relatively easy, there is much more space, platforms are large and there’s always that far side of the platform where nobody goes. Tube is trickier, but is doable even during rush hour. I find it easier to carry the bike in unfolded state by putting saddle on top of my shoulder. It is also much, much easier to roll around. I’d usually get as far as possible with unfolded bike, then fold it right before jumping into the train. On overground trips it is also possible to unfold the bike inside a train right before arrival.

Station staff will usually issue a friendly reminder that bike has to be folded during the journey. They will also help you get through the gates. It is technically possible to get through the narrow “pedestrian” gates, but they will start alarming as you are going through, thinking there are two persons trying to get in. No one really will care about the alarm, but it is annoying. “Luggage” gates are much more comfortable to use.

The bike feels pretty solid, considering the amount of moving parts. All parts are well made and fit nicely together. My only complain is about speed switcher. Strangely it is made of what seems like cheap plastic. Switch itself becomes loose during the trip and starts making annoying sounds. 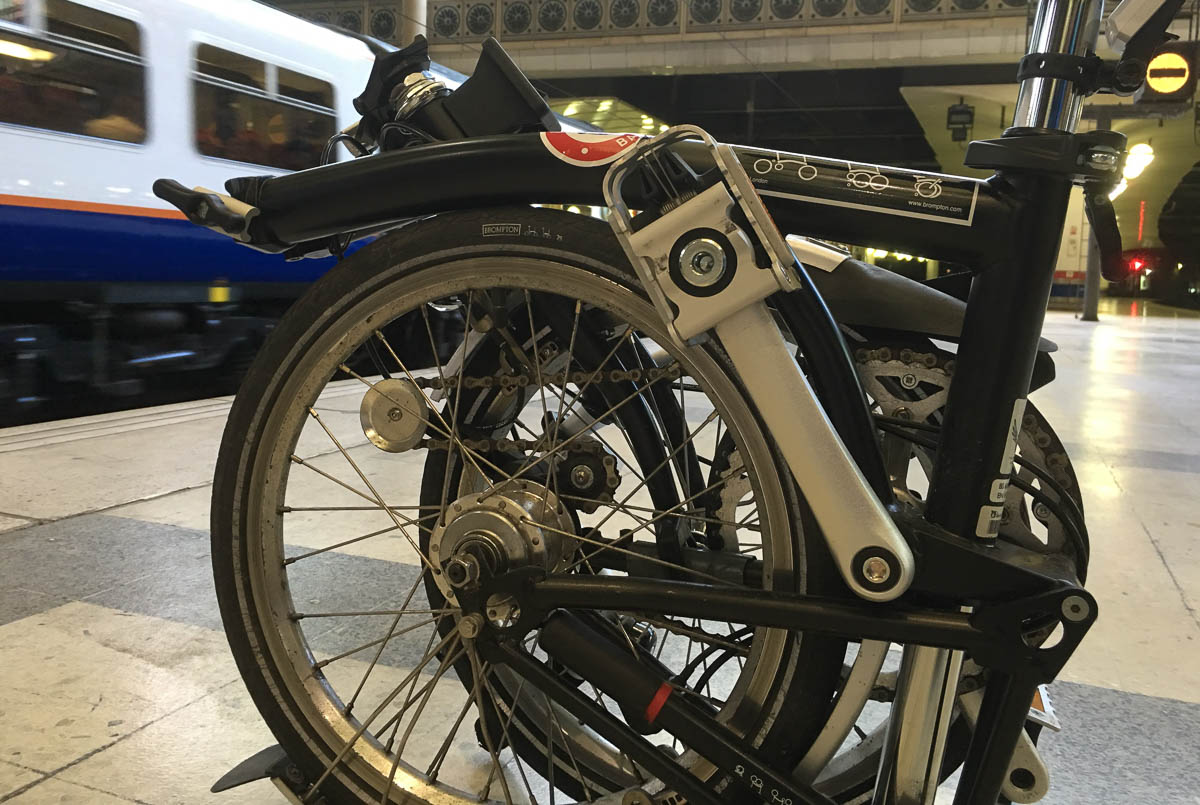 Tyres are made of something called Brompton Kevlar. No punctures so far. And yes, there’s plenty of broken glass on roads in the city.

Here’s a video of a guy folding Brompton in just under 6 seconds. Takes me about 15 seconds to perform the same. Unfolding takes about the same time, if not faster.

This is a big deal. You’d think that during the trip you would need to fold and unfold it maybe twice. In practice on a morning commute I’d go through this at least 4 times. There might be extra folding involved if I’m commuting to, let’s say, Charing Cross station - it is notorious for its super long tunnels connecting tube to the railways station. This way I’d unfold it while still underground, roll it around, fold it again, get on the escalator, and so on.

Point is - when folding is not a pain but a very quick and painless operation you have no problem of doing it at the smallest convenience.

My commute looks somewhat like this. It’s about 10km one way, with not much of hills. Central London is relatively flat. I’ve been commuting mornings on overground train + bike, and evenings pure bike. Goal is eventually to start biking both ways every day. I strongly feel that commute eats into your life, and there is nothing that can really compensate it. But if your commute is cycling, it is actually pretty awesome and doesn’t feel like commute at all.

You’re also much more in control, unlike when on the train and it stops, and nothing happens for a long time. Time to cycle home is much more predictable than taking train. And don’t even get me started on the ticket prices. Daily cycling can save a significant amount of £.

Brompton seems to be handling distances very well. It is strangely a solid bike for long distances. And by long distance I probably mean up to ~15km one way, which is my absolute mental limit for daily commute on a bike.

Foldable bike in the city is like a Swiss knife to all sort of situations. It fits perfectly into life and for me it’s almost impossible now to imagine getting around without one. Ground traffic is always stuck, underground traffic is crowded and often broken. Cycling will actually get you around in reasonable time, and you get to spot fresh street art of Shoreditch area.

Not only in city - on weekend I’d often go to my dropzone in a small village in Kent. There is this hugely annoying and plain dangerous part when you walk from the train station to the airdrome - about 30 min of walk on a narrow British road with cars whizzing past yourself. Bike changed everything - 10 min of pedalling and I’m there, signing my name on a flight manifest. 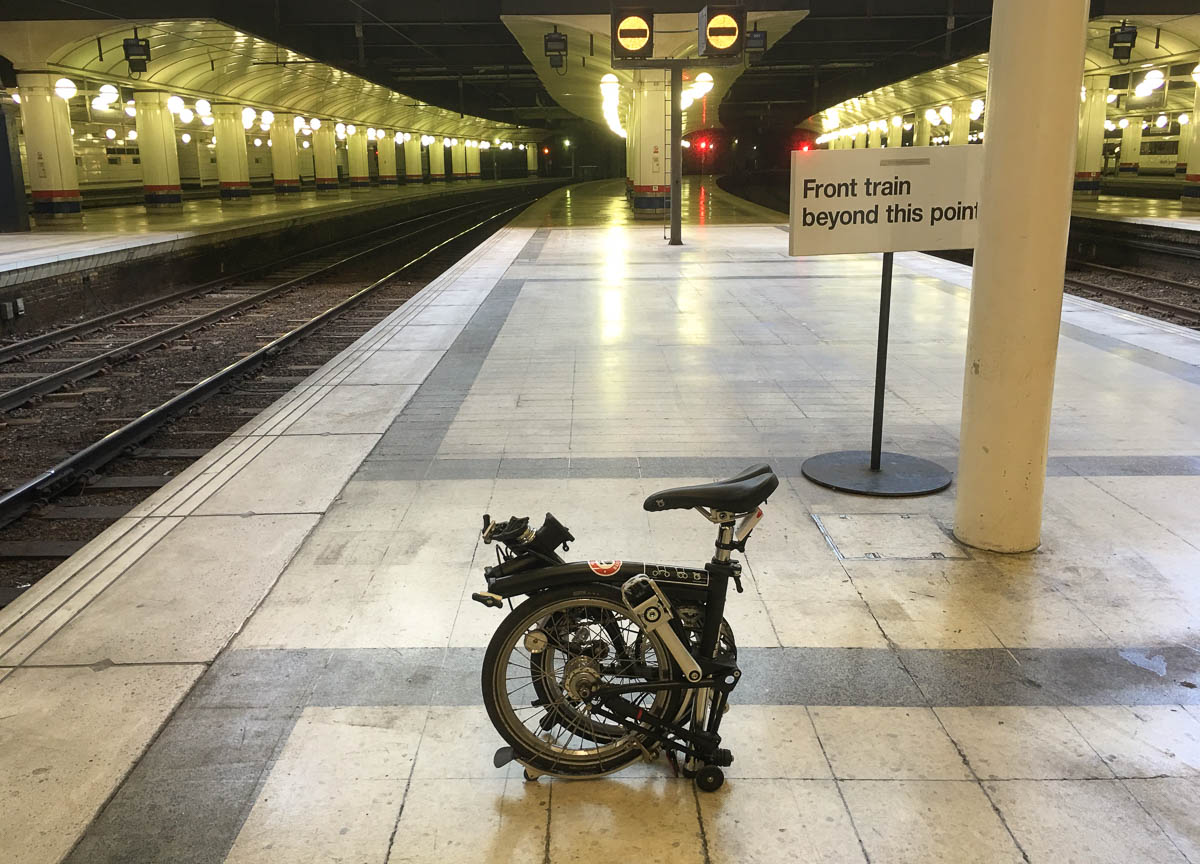 It takes some time to get used to steering and riding one. I’d also wish they put better mini-wheels for rolling it by default. And better switch for gears - something more solid and easy to switch. I also greatly miss some sort of standing support. It is impossible to leave unfolded bike for a second while buying cup of coffee - you have to find a wall to put it against, and even then it will somehow roll and crash to the ground. Some sort of an extra leg would be amazing.

In all the fairness, London offers excellent city bike scheme where you don’t even have to buy your bike - there are hundreds of stations with large, indestructible bikes ready to be borrowed. I was using it for 2 years for commuting. Unfortunately they are only available in zones 1 and 2, and since then we have moved to zone 3. Still, I’m happy to have my own bike now.

And I can carry it anywhere.