This blog is not about how to integrate Stripe or arrange payments. This is mostly about how to name your variables. As you know, naming variables is the second most difficult problem in software engineering.

Money is a highly sensitive topic, and if you are tasked with the implementation of money related features, there are a few things to consider. This primer will apply to JavaScript-based apps, and we are going to look at both frontend and backend parts of the solution. Some practices could be extrapolated and used in general to improve code maintainability - like verbose variable namings. But this is mainly a collection of learned practices from several production projects I’ve been involved in the past couple of years, serving millions of customers.

Since I’m based in London, Britain used to have the most amazing currency system. Up until the year 1971, we used to have pennies, shillings and pounds. 12 pence would make a shilling, and 20 shillings would amount to a whole pound. Luckily today most countries in the world have adopted decimal-based currencies, where there are generally 2 different units of money - like pounds and pence. A pound today equals to a 100 pence, and that’s it. No halfpence, shillings or other base-12 units. (fun fact - if you prefer base 12 numbers and currencies, you are a dozenial)

This makes things significantly easier for us today. But a few challenges remain.

If you’ve been dealing with Stripe API or other similar money processing services, you’ll notice that among other things they’ve chosen to represent all monetary values as integers in a currency’s smallest unit. This approach is called Zero-decimal currencies. For us this will mean that all values are in full pence - and consequently are integers. This elegant choice solves both of the above-mentioned problems in a single sweep, since:

As far as backend goes, we can handle and store all values as integers aka pence / cents / insert your smallest unit here. If you are starting a new project, this could be a convention you introduce on a team level. However, if you are in the middle of the ongoing project, a few challenges arise. Likely, money is already handled and stored in some way. It is also likely that it was stored as floats, with pounds and pence. This is how we as humans handle monetary values since elementary school.

It is also likely that variables and database columns containing money would likely be called “amount” or “refundAmount” or something along the lines. There is a common understanding about the representation of the monetary “amount”, and it is likely not what you want it to be.

Here we are going to introduce a key convention. All variable names must contain units if there is a unit involved. This way there is no ambiguity about the representation of the value.

One of the catastrophic software bugs in space was in 1998 when Mars Climate Orbiter crashed into the planet instead of successfully slowing down itself into Martian orbit. The reason was two separate software modules relying on each other but using 2 different units to represent impulse produced by thrusters. Software integration is indeed where things often fall apart.

Name of a variable should reflect its content - I hope this is something we can all agree on. When you walk through the code, a variable name should be verbose enough to tell you its purpose.

Would this pass a code review? It probably would, especially if we supply a few unit tests. A nice pure function, well tested indeed.

Now, shippingCost is supplied by a separate service, which has everything in pence. This way we end up in a situation when two arguments are supplied, one in pence amount, another in pounds and pence. There will be no errors, however, the outcome of our function would suddenly be very much off.

Everything is more verbose now, but also it is much clearer what this function expects as inputs, and what kind of output will be returned - function name contains a promise of a unit now.

In TypeScript you could make things clearer with strict typings:

But even then you’d still have to provide a custom type with an implicit name like Pence:

This brings a good level of clarity, but even then I’d argue that having InPence as part of the variable and function names is simpler, more effective and much more human-readable.

Of course, this is not limited just to functions and variables. The same convention applies to component properties, DB column names and anything else that contains or deals with monetary values.

JavaScript is notoriously bad with floating comma math. Try this in your browser’s console:

Turning everything into integers helps to a certain point, but even then you might struggle with things like division and rounding to the nearest pence. There are libraries like Decimal.js that give better control over the decimal related math.

In any case, you probably want to contain business logic and perform it most safely. Ideally on a backend. Send inputs, calculate and render output on the client. If you are in control of the full picture, you could have all the amounts always converted to pence, and only at the very last moment presented as pounds and pence for user’s convenience. 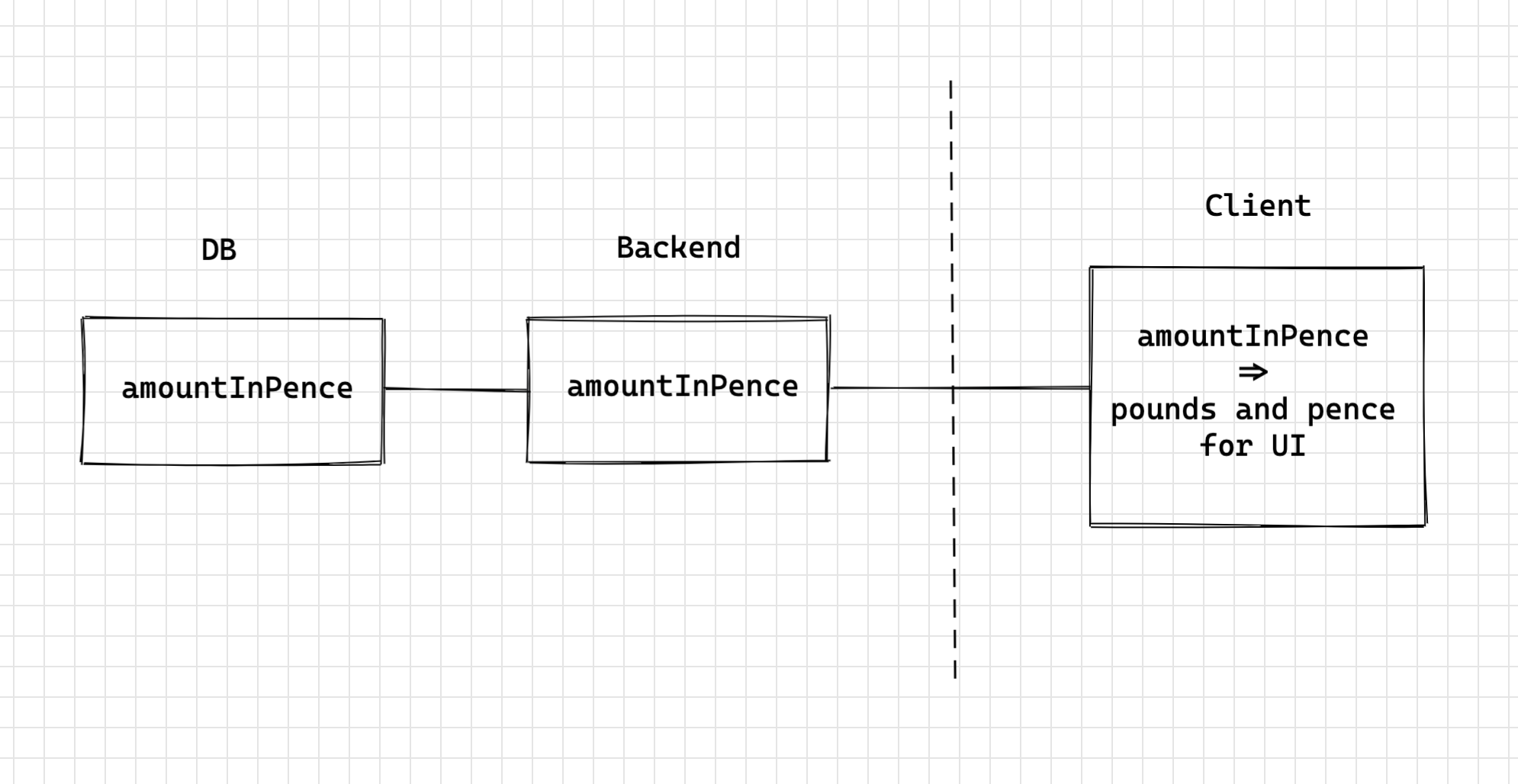 I’ll use React terminology, but the same goes for any component-based framework. The main challenge of the client-side is this is where you want to represent monetary value in the most familiar format for the user. This means turning 45783 into something like £ 457.83.

Is this all? Well, some countries also like to separate large amounts with spaces, like £ 1 000 000.00. And of course, even if the value is in full pounds, you still want to display zero pence aka .00. But not in Kenya - oh no. Some countries are ok with full amounts and no pence, please.

How international is your app after all?

There are generally two stages of presenting a currency value received from the backend.

Convert pence to pounds and pence

Could be as simple as amountInPence / 100.

Of course, you can never be sure with floating comma math and JavaScript. To be safe you probably want to validate the result of the calculation. Or use a library like Decimal.js. Or both.

A rare case when standard JS library is perfect for the job. Meet Intl.NumberFormat:

There will be a need to allow users input of pounds and pence. There are a few ways of approaching this, but the general idea would be to allow decimals input and then convert it into pence value before sending it to the backend. Ideally, as soon as possible.

There are a few ways of approaching this, but one way is to contain pounds and pence input in a dedicated component. For this purpose you can make a custom input component that uses onChange event, immediately converts the value into pence and passes this forward to the rest of the app where everything is always represented in integer pence.

Of course, implicit variable and prop naming is especially important in places where we have the same amount represented in different units. amountInPence and amountInPounds is the convention we have adopted for such scenarios.

If you are dealing with complex business logic involving division, you might have to address a topic of accurate rounding. In a scenario where multiple calculations occur before the final result is returned to the user, it may be off by a few cents because of multiple roundings occurring as part of every step of the calculation.

However if you as a user decide to double-check this calculation, you will end up with 15814.3934025, which is, even when rounded, 1 penny less then what we’ve come up with.

There are a few ways of addressing this, assuming you are sticking with JS environment and there are no other alternatives at this time of the day.

Handling money in your app is tricky and can lead to upset customers and loss of revenue. But if nothing else, these two things can make your life easier: